Share All sharing options for: 'Woodscraper' Envisioned in South Loop; Tending to the Spire Hole; More 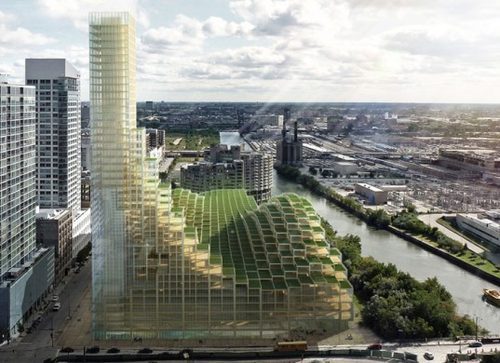 SOUTH LOOP— A visionary architect who fancies green, sustainable construction is turning heads with a long-shot concept for a 30+ story skyscraper made of wood. Michael Charters' design plays with the vacant swath of land running from River City to Harrison along the South Branch. The concept even took time to lay out its mixture of uses within the undulating structure. It's a mind-boggling reveal, that's for sure.

STREETERVILLE— The biggest real estate news item of the week is surely the revelation that Irish lenders are shopping the $93M in debt on the former Chicago Spire property at 400 N LSD. Developers have been circling the 2.2-acre site with its conspicuous hole for a few years now, but the market hasn't been right for the debt offering. Any buyer would probably want to build something substantial on the site, just not Spire-scale.

EVERYWHERE— Let Curbed carry you into St. Patty's Day weekend with a compilation of regional on-the-market homes with legit basement-inhabiting Irish pubs. Guinness and coziness abound, though some spots do it up better than others. Predictable, yes. Of great amusement, probably.

OLD TOWN— A house of tremendous presence is back on the market in Old Town, asking $3.5M. It also has a tremendous history attached to it: built in the 1890s for the inventor of Margarine, the home transferred to sleazy and dysfunctional heirs who transferred it to halfway house operators. It then returned to single-family use and showed up in Playboy shoots. Now it's just another lonely manse.