Share All sharing options for: PBR Mansion On The Market; Fatal Blow For Old Prentice; More 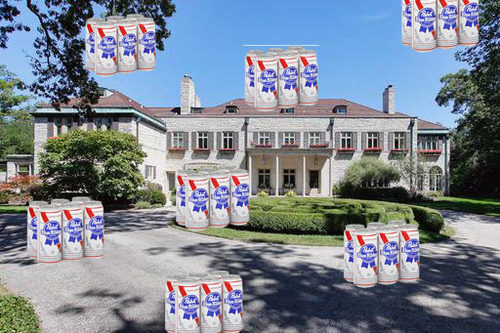 GLENCOE— The hipster Holy Grail has revealed itself up in north suburban Glencoe. It's none other than the Pabst Blue Ribbon Estate, built for beer baron Harris Perlstein in 1936! The lake-proximate 14,000 sf mansion has 8 beds and 10 full baths. Time to harness that trust fund, the ask is set at $6.95M

STREETERVILLE— For those following the two-year long preservation saga surrounding Prentice Women's Hospital, it's a wrap. The City Landmarks Commission did the expected this week and backed up their prior refusal to grant protections to the iconic but disused Bertrand Goldberg building. It now only takes the expiration of a court-issued stay for demolition to proceed.

WEST LOOP, RIVER WEST— Two developers are conjuring up two distinct apartment plans on the west side of downtown. One would see 240 units built at the six corners of Grand, Milwaukee, and Halsted. The other targets 198 units for a lusted-after site at Jackson and Jefferson. Is the pipeline ready to burst, or will we keep seeing one or two large-scale proposals every week?

THE LOOP— A reader asked Curbed what the hell was up with the large vacant edifice at State and Adams? We replied in a post that the Century Building and neighboring Consumer Building were seized by the feds in derelict condition in 2005, and have been awaiting either demolition or restoration since. The conscious citizenry lost patience with the process a long time ago. Read more about it!