They say, shoot for the moon because even if you miss, you'll land among the stars. For Art Smith, Jesus Salgueiro and Linda Novick O'Keefe, their dream to establish an organization teaching low-income children how to cook through globally-inspired food has not only evolved into one of the country's leading charities, they've also created little stars in the kitchen through Common Threads. Eater spoke with Smith and O'Keefe about their five-year plan and the upcoming World Festival hosted by Food & Wine editor-in-chief and Top Chef judge, Gail Simmons.

It's hard to believe what started out at St. Redeemers Church in Hyde Park has grown across the country reinforced by chefs from around the world like Nigella Lawson, Jamie Oliver, Tyler Florence and Ming Tsai. Smith looks back over a decade of growth and support, "We have far exceeded where we thought we would be and we won't stop until we are in every school in America."

He and O'Keefe proudly recognize that Common Threads has become a think tank for children in America and they've set their sights on strengthening the future within the school program, as well as reaching kids through social media. "Our mission has become more advanced, we've served as a thought leader and change agent for nutrition and health education in schools," says O'Keefe.

Based on their diverse level of support from foundations, corporations, educators, chefs and food industry professionals, Common Threads set in motion a series of mini-summits around the country to tackle their five-year initiative. O'Keefe was armed with the mindset to integrate Common Threads as a full-year program rather than individual classes in schools. Launched in 2013, the combined yearlong Cooking Skills & World Cuisine program is being piloted in 20 schools in Chicago, 20 schools in Miami, four schools in Washington D.C. and one site in both Los Angeles and Palo Alto.

They stand at a major turning point, with plans to reach almost 30,000 kids this year alone, and with their five-year goal they aim to reach one million kids by 2017. If anything, as a group they've demonstrated the healing properties of food, the importance of cooking family meals, the beauty in creating memories around the dinner table, and the ability to affect healthy living.

All three founders note that Chicago was the best city to launch Common Threads based on the local support. "Look at Kevin Hickey, Bill Kim, Boka Group and so many others who have given their time year after year. We are successful because of those chefs," says Smith. So, what better way to celebrate their 10th anniversary than to bring back World Festival to Soldier Field? O'Keefe says, "World Festival is an example of the power of the chef community. It showed us that growth is unlimited when you work together and these chefs have rallied from around the world for Common Threads."

World Festival takes place on Monday, March 4 with over 40 chefs. The event kicks off with an exclusive VIP Trolley ride hosted by Food & Wine editor in chief and Top Chef judge Gail Simmons. A limited number of epicurean guests can board a Chicago trolley for $1000 with Simmons and a few surprise chefs that will land at Kendall college where Little Threads students will prepare a meal led by the chefs before heading on to Soldier Field. General admission tickets are $250; World Festival VIP's are $500. For more information and to purchase tickets, click here. 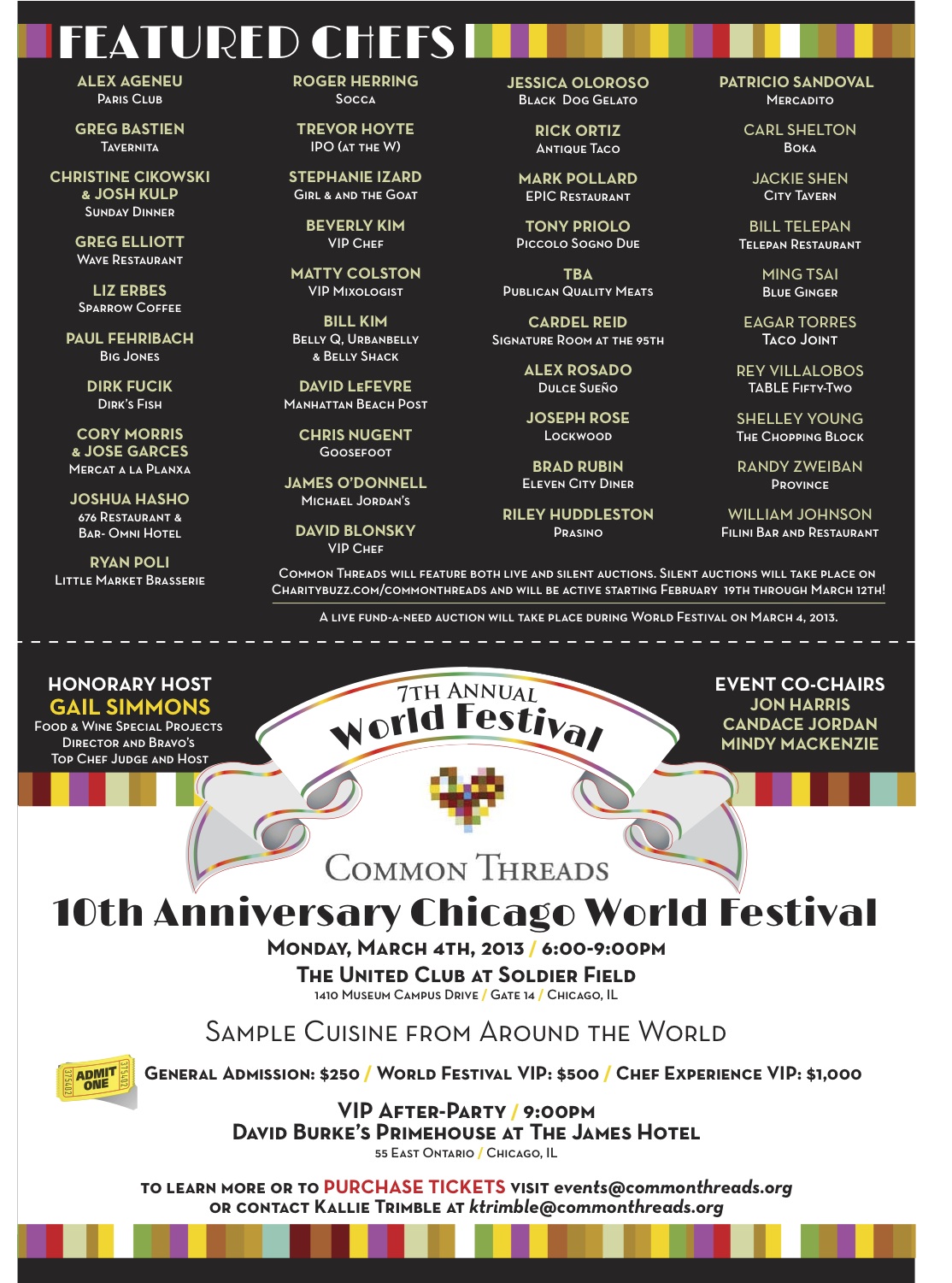