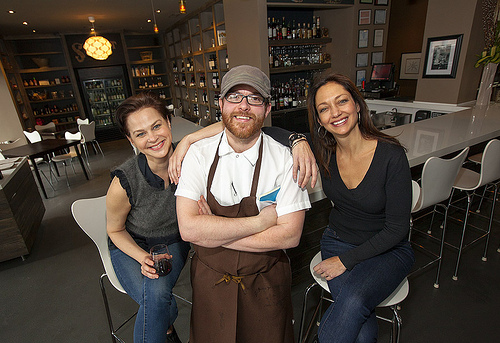 It's been quite a first year for Bread & Wine. Opening last January in vacant laundromat (Washing Well) that they termed a "dilapidated building", in a neighborhood (technically West Walker) that doesn't see much progressive cuisine, owners Lisa Fosler Kelly and Jennifer Wisniewski and executive chef Curtis Gamble have had their hands full. But they've also received mention in the Michelin Guide and the New York Times. The three of them sat down with Eater to chat about the first year of their first restaurant.

How has the first year been?
Jennifer Wisniewski: It has been surprising in every way, for the good and bad. There's been a lot of good, and some bad. We'll say a learning curve.
Lisa Fosler Kelly: We had a really positive reception from the neighborhood. We had some really good press. We've gotten better and better in terms of learning how to run a restaurant. It was a lot like having a colicky newborn.
Curtis: We can get a full night's sleep now. I think the one thing that really happened an we talk about all the time is how we started out with a general idea in concept. As we opened the doors and grew we started changing the menus around and the wine list and we started seeing the radius of people that were coming out to see us kind of grow. Not to deflate our ambitions or anything but we were kind of low-key and now people are driving up here from River North, from Evanston, from Skokie, we're pulling people in from a whole bunch of different directions. Of course the neighbors are our bread and butter but I think the scope of the restaurant has definitely been a surprise.
Lisa: That was pleasant. To get into the Michelin guide was not even one of our thoughts. We just wanted to put something in a place where there was nothing, that's how we started out.

What specific changes brought out you becoming a destination?
Lisa: The food has gotten better and our biggest marketing is word of mouth. We have a group of followers and they do a really good job of telling people they know about us to pop out. How good the food is, how nice the ambiance is, how interesting the wine list is.
Jennifer: And you can feel that word of mouth, because we don't get that much press.
Curtis: We get a lot of blurbs in the Red Eye. We've never had a Tribune review, the Tribune hasn't touched us. I think for us to be as busy as we are now without Phil Vettel putting our name in an article, word of mouth has been amazingly positive for us.
Lisa: We've done it in kind of an old-school way, every customer counts. We see that, we take care of that. We didn't get that Tribune and Chicago Magazine piece, we're not even reviewed in the magazine yet. It's just one-by-one, like an old-school rock band.
Curtis: I think one thing is, we use the word reserved about the kind of food we cook here. We kept it very approachable and familiar and we expanded on that. A year ago if people would say that sliced pig face and duck kidneys would be our best-selling items we would have laughed at ourselves. We led ourselves off with self-imposed restrictions, now we're buying wines for the list that we like to drink and cooking food that we just love to eat and we've seen the growth of that. Doing exactly what you want to do and getting the type of reception that's been super-positive, especially for a young chef, has been everything you could ask for.

What has surprised you the most?
Jennifer: That people walk in the door. Every time I see someone walk in I can't believe it.
Curtis: The personnel standpoint it has surprised me. I tell everybody that we're like the Bad News Bears of a kitchen crew. For me having never cooked in a Chicago restaurant and mostly from Pittsburgh and other parts of the Midwest, the fact that we have gotten such a great crew of young cooks and second-career cooks that are 100 percent behind what we're doing.
Lisa: It's surprised me a lot that we've never had a night where no one has come in. My big fear before we opened was that we would be at the door watching the cars go by and no one would come in and that's never happened.

Were there any specific moments that you could not believed happened?
Jennifer: When the sewage backed up all through the restaurant, that was a moment when I said "I can't believe this." It was one of our busiest nights, right in the dining room.
Curtis: It was a night of torrential downpours and all of a sudden we looked down and there was water coming out of the floor drains. Everybody was eating beef tongue and our other specials and everybody was in a jovial mood and we were firing on all cylinders. I looked down and there was one thing I had completely no control over and it's like I got kicked in the face.
Jennifer: The coolest thing about it is not one customer left, we continued service, nobody left from behind the line, nobody said "this is crazy."
Curtis: Everybody stayed late, scrubbed and bleached, and came back early Saturday. It surprised me how dedicated everybody is, because we're a bunch of nobodies as far as the restaurant business goes.

The first anniversary was last Tuesday. What did you do to celebrate?
Lisa: It was fun. We had a reasonably good crowd of customers and at 9:00 we gave all the customers some champagne and we did a toast and thanked them for supporting us.
Curtis: It was the first time all three of us sat down to eat and that was really good. The first time I really ate here was two months ago, we're constantly tasting everything and collecting everything.
Lisa: We're also looking ahead from that night, we might start our next venture shortly. That's what the meeting was about. We're still concentrating on the nuts and bolts here, but we're looking ahead.

Is it similar or a different concept?
Lisa: Different concept.
Curtis: We're still looking at Americana-focused taproom food. A lot of the things we do here are like people coming to a wine bar. It might be chicken wings, which is one of our biggest-selling things that people ask about all the time. It'll be like those kinds of foods, just super-elevated and approachable.
Lisa: Pickles, lots of beers on tap, whiskeys, wine on tap. Different concept, different neighborhood.
Curtis: Like 10 minutes away, in case something happens again like the water break so we can be there quickly. Someplace a little more noisy, a little more crowded.

Talk a little bit about how the location came about.
Lisa: Jenny and I both live in the neighborhood, I've lived in the neighborhood for 10 years. They call it West Walker. We live in Old Irving. We look at it as serving Old Irving and West Walker and Independence Park.
Jennifer: My father grew up in this neighborhood. I just saw it as the Northwest Side, and the Northwest Side doesn't have anything.
Lisa: We have daughters the same age and we were having a play date and we mentioned the fact that as long as we've lived here, unlike Lincoln Square or Andersonville, nothing has changed. There's still auto parts stores and tattoo parlors. I was looking to change careers and Jenny was looking to change careers and this whole idea was hatched specifically to bring something to our neighborhood.
Jennifer: People look at it as challenging, I look at it as opportunity. Gentrification is happening and Lisa and I both didn't see a point in going into Wicker Park or on Randolph. Let's do it in a place that's underserved.
Lisa: This is something people say when they leave: "Thanks so much for putting this here."

What are you looking forward to doing in year two of Bread & Wine?
Lisa: We want do to do more specialized dinners like wine dinners, whisky dinners, and tequila dinners.
Curtis: The tequila dinner will be the first, sometime in February. We're constantly pushing ourselves to do more with the odd bits and stuff like that because the response has been astronomical. We're going to be doing a lot more whole animal butchering.
Lisa: We want to have a lot more items in the market, start a line of spices and rubs.

Do a lot of people mention the New York Times piece or other press?
Curtis: I'll never forget the day the Michelin Guide came out. It was my day off and my sous chef texted me and said "I just saw the (Michelin Bib Gourmand) list and I want to make sure you're okay because we're not on it." I remember I was standing in a stereo store and thought I'd buy a new stereo and console myself with a purchase. Michelin recognition for us is just icing on the cake. Being in a guide that's only published in three cities in the United States is pretty cool.
Lisa: The New York Times article really helped us.
Curtis: Once that came out we started to see people that were doing layovers at O'Hare and weren't even coming to Chicago but had time to kill. It's actually been republished in airplane magazines.

Has it made it more challenging or have you received more support because of being doubly female-owned?
Jennifer: I think both. But on the other side of it, we pay no attention. If you look at it that way, it could be a challenge and it could be an asset, but you just do the best that you can.
Lisa: We have a lot of female clientele and that's gotten some press, on certain nights it's 80 percent female in here. And we don't have a female-centered menu, it's very meat-based.
Curtis: Everybody wants to talk about our female clientele but nobody wants to talk about our female clientele that eats beef-and-chorizo burgers and beef tongue. I thought it was kind of a tacky thing for some people to point to. It could be two men owning this restaurant and the same clientele could be here and no one would talk about it.
· All Coverage of Bread & Wine [~ECHI~]
· Bread & Wine [Official Site]