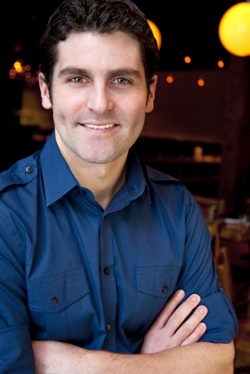 "Our mission statement, if you will, is the preservation of food culture," Brendan Sodikoff says. "Maybe we will do things that are kind of on the edge, but what I really care about is doing things that are good, that have a history," he continues. "That's why I want to do a deli, because I feel delis are dying."

Delis may be dying, but Steve's Deli (354 W. Hubbard) is officially dead. The space's deli history will carry on, however, through Sodikoff's Dillman's, which is officially replacing it. The rumors were true.

He says that all the traditional Jewish deli trimmings will be front and center: Pickled herring, gefilte fish, matzo ball soup, corned beef, pastrami, pickles, in-house smoked meats, house-made cream cheese, house-made caraway rye bread. He says he "wants that bagel culture—people that are rolling them by hand and throwing them in the water and coming out of the oven really hot. When you run out, you run out. See you tomorrow, no more bagels."

"The décor and stuff, I don't know how people are going to take it, it's going to be a comfortable space and very unique," he says. The space will be divided up into four sections (coffee bar, bakery, bar, dining room) with only part of it open during the day. That will be a communal area with the coffee bar and bakery, which will segue into an actual bar in the evenings. He wants it to be a place where people just hang out, have meetings, work on laptops, and the like.

At night it will turn into a full restaurant. A traditional dining room will open up, filled with tables, chairs, and booths. The whole space will seat 140, 50-75 of those in the coffee bar/bakery area. The hours will be from 7 or 8:00 a.m. until midnight or so.

Sodikoff is confident about the outer-River North location. "Edges always move," he says. "The best way to improve any area is to put a good restaurant in it." Look for it to open within three months.

The deli may be traditional, but the ramen shop will be arguably more so. "It's going to be in a concrete basement with 20 seats where you can order two things," he says. "That's it." Those two things: One type of ramen, one type of beer. The ramen will be miso-style pork and chicken broth, with two spices (Szechuan and togarashi) which can both be adjusted for taste. He says it will be "intense, aggressive, bold, and spicy."

He says he's perfected a traditional Japanese alkaline noodle recipe (alkaline salts, flour, water, no egg) which will either be made in-house or outsourced to another location. Like the bagels, the shop will close when the noodles run out. It will be run on a Tokyo-style ticketing system to order from when walking in, which means if customers want more they'll have to get up, go back around to order again, and risk losing their seat. "There will be a little love/hate relationship with us over there," he says. "Get two giant beers, a bowl of ramen, super cheap, and out of there in 20 minutes."

The BBQ spot is inspired by some Southern-bred Hogsalt employees. It will be in a large industrial warehouse space on Green Street in the West Loop and feature a large outdoor garden. He feels the space "lends itself perfectly" to BBQ. Both the BBQ and ramen spots will open by summer's end, after Dillman's.

Finally, the renovation below Gilt Bar is almost complete. Look for it to open within two weeks. Whew.
· All Brendan Sodikoff Coverage [~ECHI~]