Share All sharing options for: GM Eden Laurin Talks About The Violet Hour 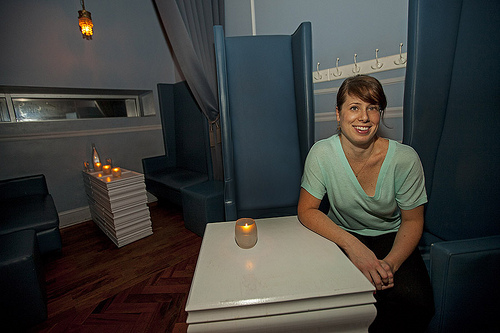 Eden Laurin worked her way up to General Manager of exclusive cocktail lounge The Violet Hour the old-fashioned way. She used to work in non-profit and started hostessing there once or twice a week before becoming a server. Soon after she begged to become a bartender, earned that, and eventually was promoted to GM. Coming up on six years open, The Violet Hour has become a template for the explosion of craft cocktail bars in Chicago, and the DePaul grad has been there for five-and-a-half. She talks about the business, the waits, the rules, and the fires at the Wicker Park craft speakeasy.

How busy are you still since there's so many other places that try to do what you do now?
I'd say we were the first high volume. These smaller places have definitely been doing it longer than us. Our business is definitely seasonal so we're very very busy in the summer because there's a lot more foot traffic and tourism and it becomes a place that people want to check out and see. In the winter it's dark and warm and like a little cave. It's a very nice place to bring guests that are in town. You can't talk on your cell phone so you have to be with the company that you're with. In general we are still very busy. On Saturdays we fill every seat in a half hour. I get a lot of people that ask for reservations so I have to say "we don't take reservations, but if you're trying to come on a Friday or Saturday get here as close to opening as you can so you can get a seat." People come for pre-dinner drinks and an hour-and-a-half later there's a max exodus and we fill the seats again.

How much does the "impossible to get in" reputation hold true?
We don't do standing room, and we would probably make a lot more money if we did, the cocktails are focused and take time to do. Whether people come in on a Tuesday night at 8:00 or a Saturday night at 8:00, I want the experience to be the same. We kind of shoot ourselves in the foot because we have the same amount of seats every single day. When I work on a Friday or Saturday I feel so terrible and I go out and talk to people and say "hopefully it won't be long and I'll try to get you in as soon as I can." What I try to do on cold days is make hot cider and bring it outside and give it to people. People are just waiting on the sidewalk and have no idea how long the wait will be.

How do you handle the seating because it's so small?
We have a back room with a fireplace that we open up on Thursdays through Saturdays and gives us a lot more seating. Often people are sharing benches and sitting with other people. That helps a lot because we can accommodate big parties or smaller parties. We have a staff that's very accustomed to adapting, we've done crazy things like put tables together to make a 14-top that's been waiting to get in. We just kind of go with the flow.

How about the no-phone policy, the dress code, those kinds of things?
We have house rules that are printed in the bathrooms and in the hallway. The ones that we enforce are: No cell-phones is kind of a bigger one. Texting, tweeting, photos, that's all fine. Just talking on a cell phone. If someone's on a cell phone we'll gently ask them if they could please step into one of the hallways. The doormen do let people know when they come in. It's interesting because four years ago that seemed very reasonable and people were like "I'm ecstatic to not have my cell phone." Now we've changed our views on cell phone use as a public and we've changed our cell phone use, we use it for everything. If I were someplace (with that policy) I'd have to take a second to process that. 99 percent of the time people are totally okay with it. We have rules for no baseball hats, no cargo shorts and no open-toed shoes for gentlemen. On a weekend night we'll say "please (don't wear that) the next time you come in, just so you know this is our policy" rather than send someone away. We don't have any Red Bull or anything and we have (rules) for no "O-bombs," "Jager-bombs," and those kinds of things. We don't have Grey Goose, we only use one vodka. Just recently it's been changed, we have two vodkas. When we first opened we only had one or two vodka cocktails and we're definitely trying to focus away from drinking vodka and we try to recommend other cocktails, but if someone wants vodka they want vodka. And the no reservations thing is a big one but sometimes we'll take people's numbers so they can go get a cocktail or a taco and we call them when something opens up, or else they'll be waiting a really long time.

What celebrities have come in?
Laurence Fishburne is our favorite. He had such a good time that he brings friends in when he's in Chicago. I was super star-struck, I'm a CSI fan so I flipped out. The mayor comes in sometimes and he's a wonderful gentleman. Bono, that was very cool. Bill Murray, also very cool. He just sat at the bar and gave half the staff a ride home. Celebrities can't make reservations either, but someone might give a heads up. A real embarrassing one for me was Depeche Mode, because I love Depeche Mode. Somebody had told me it was the sound guys (that were coming in) and not the band. I ended up talking to them for a long time and asking what it was like to tour with Depeche Mode and I told them how much I liked them and they left tickets for the show for me at will call the next day. I went and it was the band (that had come in) and I was so embarrassed. I asked them what it was like to work for these guys and it was them the whole time. There's a lot of bands (that come in), Black Keys and stuff.

What are the Gatekeeper tools you need to do your job?
It takes being calm, multitasking, and a sense of humor. On weekend nights it can be bonkers, people come in wearing costumes or attempt to display pyrotechnics with our candles because all of our lighting is candles. The tempo stays consistent but I have to be flexible. There may be times we have a line and the line will only be groups of eight or more. The only way this job works is having amazing staff and wonderful guests that come in. When we first opened there was a lot of difficulty (with the wait times and rules), especially trying to communicate it. People like waiting and watching the process and tasting an ingredient. People are much more patient and I'm appreciative, it makes my job a hell of a lot easier. It's way better than when people are lighting shit on fire.

I want to hear about people lighting shit on fire.
Oh god, it's constant. I try to pay attention when I go out but I don't think there are many places that just use candlelight anymore. Accidents happen and I understand that. Sticks and straws and napkins get set on fire. And when I say to someone, "please don't light things on fire" they're like "oh my god, you're right, I'm sorry." We took their cell phones away so I guess it's giving them something to do.

When you're not there, where do you like to go to drink?
I'm an anomaly. I don't drink beer, it makes me sleepy, and I generally just drink bourbon. I go to The Charleston, Big Star, Danny's. Every once in a while I like to go to Boiler Room because you can get a shot of Jameson and a slice of pizza for cheap and it's so good. When I get cocktails I go to Scofflaw.