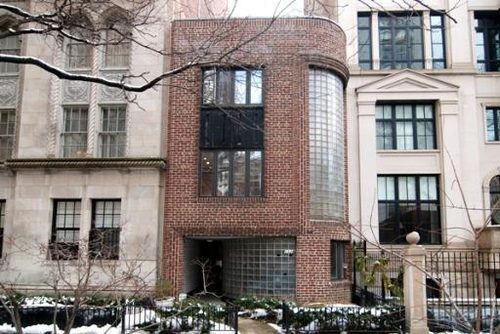 GOLD COAST— The famed Florsheim Mansion, designed by Andrew Rebori in 1938 and reconfigured by Bertrand Goldberg in 1956, is back on the market after an 18 month breather. In that time, the highly distinctive 4,500-square-foot home lifted its asking price from $2M to $2.2M, a partial recovery from bigger slippage beginning in 2010. See this sculptural glass-blocked abode for yourself.

EVERYWHERE— Curbed updated its Development Map, the master list of large and influential projects at a promising stage of planning or already under construction. Several completed projects aged out and more than a dozen new ones have been added in our first revisiting since the map's October debut. Take the tour!

LINCOLN PARK— A planned hospital expansion, 24 years in the making, now has a rendering and a set of details to shop to the public. A zoning change is already in place for the site at Sheridan & Surf, and approvals may arrive later this year for the Center for Advanced Care, Presence Health's 10-story, 200,000-square-foot outpatient facility.

LINCOLN PARK— There's a first time for everything, and in all these years of development chatter over the Webster Square hospital-to-residential development we had never actually photographed the site. Until now. With something resembling a firm timeline in place for the first rental stage of the adaptive redevelopment, we bring you photos of the semi-demolished and partly-rebuilt site.