What Restaurants Did the Experts Break Up With in 2013?

Share All sharing options for: What Restaurants Did the Experts Break Up With in 2013? 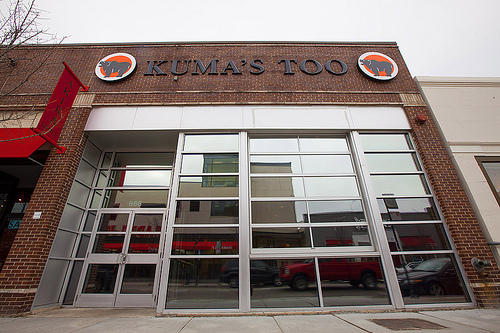 A couple people broke up with Kuma's this year [Photo: Barry Brecheisen]

Q: Which restaurants, if any, did you break up with this year? Why?

Steve Dolinsky, ABC7: Kuma's and Kuma's II: Like Graham Elliot, just way too much hype and no substance (not to mention Clockwork Orange-like torture music in dining room). OON: terrible first-date, and now extremely gun-shy about going back.

Amy Cavanaugh, Time Out Chicago: I used to recommend Purple Pig to everyone who came to town, but then I had such a lackluster meal there this year that I won't be doing that anymore.

Chris LaMorte, Urban Daddy: Bacino's. This has been a go-to for 25 years. But I think they need to step up their game in the way other local old-school chains have. The heart has gone out...

Carly Fisher, Food Fanatics: Ina's is breaking up with me by closing and I'm very heartbroken about it.

Audarshia Townsend, 312 Dining Diva: Parsons Fish & Chicken and Honey Butter Fried Chicken. Did both once and I was underwhelmed with the dried-out chicken at one spot and undercooked meat at the other. Also, too much hype over something I could pay half the price for "in the 'hood" on the South Side—and it would be cooked much better with FLAVOR.

Penny Pollack, Chicago Magazine: I'm close to breaking up with Portillo's drive-through because the line of cars wraps around Clark Street.

Nick Kindelsperger, Serious Eats: I'm not known as a huge fan of thick Chicago-style pizza, but I've always given Art of Pizza a pass, because even though it was crazy, it somehow hit the spot when it was very, very cold. But I think I've been living a lie. They can call it stuffed crust pizza, but that doesn't stop there from being a layer of uncooked dough under the sauce, and it bugs me to no end. Why don't other people care about this as much as I do?

Chandra Ram, Plate: I broke up with Glenn's Diner; my once beloved pretzel-crusted walleye just hasn't been as good since Glenn left.

Sarah Freeman, Zagat: I got dumped so hard by Flipside Café. The cozy little ten-seat spot on Damen usually took over the Miko's Italian Ice location during the cold months. It broke my heart by not returning this year. It served some of the best grilled cheese in Chicago.

Mike Gebert, The Reader/Serious Eats: Kuma's, it's not you, it's me.

Sean Cooley, Thrillist: If I have to pick one, it's Flaco's Tacos. I was really excited for them to branch up north having eaten at the other two locations, but the Wrigley bar-ification of the new stop has hurt the overall quality.

Jeff Ruby, Chicago Magazine: I tend not to break up with restaurants unless they close. But I was shocked at how a serious restaurant like Joe's Seafood had sunken so easily into cheezola tourist catnip. When did that happen? And why?

Michael Nagrant, RedEye: Spoon Thai. I don't know that anything bad happened except that Andy's Thai Kitchen opened and I ate a lot at Pok Pok in Brooklyn when I got out to New York, so I just didn't eat there like I had in the past.
· All Year in Eater 2013 Coverage [-ECHI-]