Share All sharing options for: Food Experts Pick Their Single Best Meal of 2013 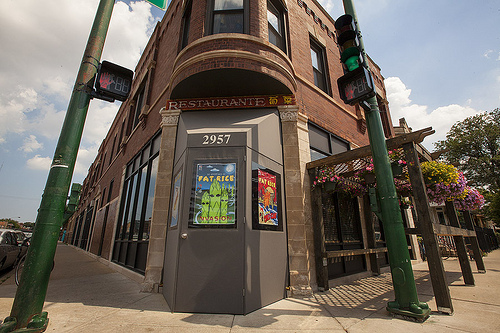 Great meals were consumed at Fat Rice [Photo: Marc Much]

Michael Nagrant, RedEye: Next vegan. If Dave Beran was my personal chef, I'd travel the world with Morrissey screaming "Meat is Murder."

Jeff Ruby, Chicago Magazine: The Lobby. My group pretty much had the quiet room to ourselves, the sunset was ours, the balcony string duo played for us and us alone, the gracious staff was on fire, and Lee Wolen—who has now moved on—was at his best. He excavated the center of a foie gras torchon, filled the cavity with custardy grapefruit purée, and paired it with an almond crumble. It was a 4-star experience that came out of nowhere.

Amy Cavanaugh, Time Out Chicago: In March, my brother and I took a BBQ road trip through Texas that culminated in lunch at Franklin Barbecue. I had never waited in line for four hours to eat something before, but I'd never had brisket this good before either. In Chicago, I had a glorious meal at Fat Rice. Course after course was exciting and different and I rarely leave a meal feeling so energized and enthralled.

Sean Cooley, Thrillist: Burger and beer at DryHop. Matching up the brisket and short rib, sweet and smoky ancho chile-tomato jam and aged cheddar burger with any one of their top notch beers is euphoric.

Lisa Shames, CS: Arrgh, that's like picking a favorite kid—that is, if I had any. On the high-end, I'd say Grace. Beautifully plated food that was interesting and delicious. Makes a very solid case on why fine dining still matters. On the other end, I'd say Tanta. I'm a sucker for great raw seafood and acidic flavors (love those sauces!). And I also like that it's a restaurant dedicated to a cuisine that's not greatly represented in Chicago.

Sarah Freeman, Zagat: Senza — again. I knew the place was something special when I was served the scallop dish with cippolini, edamame, blueberry and oxalis. The combination of savory scallop with sweet blueberry was maybe one of my favorite bites of the year.

Nick Kindelsperger, Serious Eats: Besides that dry-aged steak at Owen & Engine, I kind of fell in love with Avec again this year. It'd been a few years, but the meal I had was so good, I waited all of a week to go back again.