Share All sharing options for: What Were the Top Newcomers of 2013? 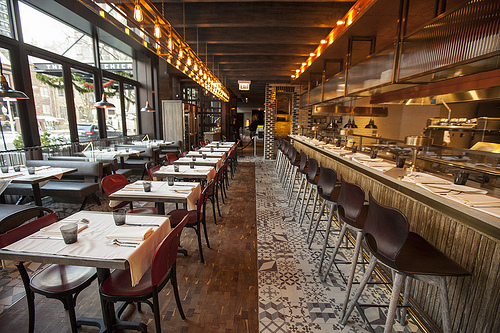 Open less than a month, Nico Osteria is a top newcomer. [Photo: Marc Much]

Michael Nagrant, RedEye: If I have to pick one, I'm going with Nico Osteria. But, I was also incredibly impressed with Sumi Robata Bar which finally got Japanese right, and Tanta which brought something new and exciting to the marketplace.

Mike Gebert, The Reader/Serious Eats: This is the year of Fat Rice—an exciting, completely-new-to-us cuisine, a restaurant that's entirely a product of personal vision and labor of love, and it's packed every night. Sometimes the good guys win.

Sean Cooley, Thrillist: I think we're all worshiping at the temple of Eataly right now. Quick, amazing pizza, a full Nutella bar and an in-house brewery. New York got the taller building, but we got the better Eataly.

Steve Dolinsky, ABC7: Dusek's in Pilsen. With Nightwood on the eastern edge of the 'hood and this beautifully renovated beer hall/concert space more centrally-located, the neighborhood is poised for some major attention from the food press beyond Chicago's borders. I love the Mad Men vibe in the basement Punch Bar, and Jared Wentworth's beer-inspired food is downright exciting, on a block known more for tacos than tenderloin.

Audarshia Townsend, 312 Dining Diva: Everyone's going to say Grace, but I cannot because we couldn't get a reservation until January 2014. I've been there for parties, but not for dinner yet. So I am going to have to say Nico Osteria. As with what they've done with Blackbird, the guys behind One Off Hospitality have flawlessly executed Nico. I am looking forward to spending time here when it warms up.

Sarah Freeman, Zagat: When a chef of Gaston Acurio's caliber comes into town the food better be good. Tanta lived up to his reputation with a solid mix of traditional Peruvian dishes and more finessed plates.

Chris LaMorte, Urban Daddy: OK, this is a bit of a cheat, but Fat Rice. It opened late in 2012. Could have been another hipster-blip on the radar, instead, turned out to be approachable, fun, and delicious.

Penny Pollack, Chicago Magazine: Hey, 2013 isn't over. I have yet to try Nico Osteria or Cicchetti.

Amy Cavanaugh, Time Out Chicago: Tanta—it felt polished immediately, and the ceviches are just so fresh and bright.
· All Year in Eater 2013 Coverage [-ECHI-]