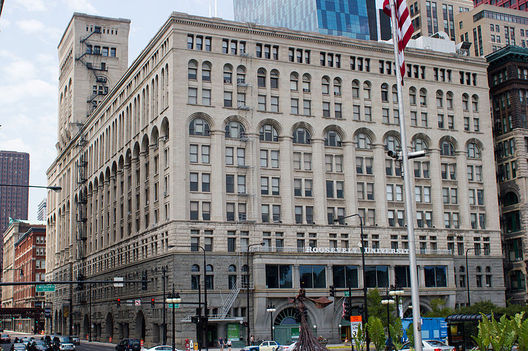 THE LOOP— Because Chicago has so many well-built buildings and because we're partial to architectural features, the weekly Bossy Buildings series has arrived to showcase the edifices that really throw their weight around. We mean raw brutes and aesthetic giants, alike. Our first post hoists up the Auditorium Building; put a nomination in for weeks to come.

HIGHLAND PARK— The auction of Michael Jordan's suburban estate launches Monday with the minimum bid set at $13M. That's a lot less than Jordan sought on the conventional market but still enough to warrant the auctioneer pulling out all the stops to feature the property. Exhibit A: a 9-min promo video complete with flashbacks, interviews, agent tours, and narration.

GOLD COAST— Former Sox pitcher Jose Contreras, now with the Rangers' farm system, has listed his three-bed Gold Coast condo for $849,900. That immediately sets Contreras up for a $300K loss, before price chops. Basically, 1440 N LSD is a subpar building that some folks paid too much to live in during boom years.

THE LOOP— Two full floors of the Metropolitan Tower (aka Straus Building) are back on the market for a combined $3.69M. That's essentially half the asking price from 2010, when the raw "custom build-out" spaces first listed. The agent totes around some renderings that evoke a bedazzling lifestyle, but you're free to do as you please with the 7,600-square-feet— or do nothing and be content with a cave.