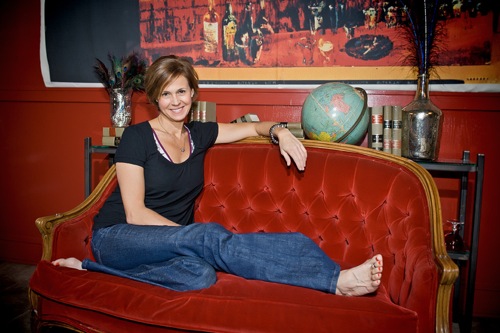 Growing up in the Morton restaurant family gave Amy Morton a unique perspective, but she branched out when opening Found a year ago. She stepped away for 14 years before teaming with chef Nicole Pederson to bring her vision of "found" items and approachable chef-driven food to life just north of the city border. Morton shared her lifetime of insight and her thoughts on the first year of Found, the Evanston community, the combination of women ownership and chef, and what's to come in the future.

How has the first year gone?
Since day one, (I have been) totally astounded at the response that we've gotten from our community. What I really set out to do was, this was a local restaurant that people travel to and the number of guests that come from the city and further up north and have really traveled (here) is so validating. I really have always envisioned that we are the perfect meeting ground.

What has set you apart and helped you to be successful when others haven't in Evanston?
The funny thing is, I was positive this restaurant was going to be in the city, I was positive it was going to be in Andersonville...choosing to be in Evanston was truly one of the best decisions I've ever made. I knew that no matter where I was, my goal was only to be world class. My big concern about being in Evanston was being taken seriously. I think we fill the niche that there was a calling for. We wanted to create a restaurant that had impeccable food, service, and beverage program, but never have anyone notice it.

What niche did you fill?
Serving major food in a super relaxed setting so that people don't have to go downtown for it. My Dad tried to do that in Highland Park in the 70s and he said "everyone wants to go downtown, you don't understand." So I think the niche is the quality of food; the intersection of the food, beverage, service, and vibe that we have.

If you were to pinpoint, which facet has been most instrumental in the success in the first year?
I had an incredible time of doing the space, I envisioned it for a long long time. I think that the winning ingredient is the fact that since day one people have said that, "Oh my gosh, the food is just like the space." Eclectic, spunky, and there's always a surprise. The fact that Nicole's food is so parallel is the crème de la crème. At the end of the day, I have to boil it down to the energy, the energy within these walls is a product of all of us and all of the things.

Was there a certain vibe or personality you were looking for with the service and the staff?
We want people that we really like and who are comfortable in their own skin. We like different personalities. We don't have a dress code. But there is no other criteria except for knowing a shit load about food, wine, local spirits, and can take great attention to detail. After that it's really a personality basing. A funky vibe always works.

What has your experience been like with being a female owner and having a female chef?
If it took me five years to get this place going, it was five years and a day that I knew I wanted to work with a female chef, even when I had my restaurant in Old Town, back in 1989-93, I had worked with female chefs. Even though Nicole wasn't planning on it, we have a lot of female energy in the kitchen, which is phenomenal. Both of our sous chefs are also women. Our marketing and private gathering directors are women. Our GM is a man, we need a little balance there.

Do you feel like that's had any effect or given you a different personality or than other restaurants?
I think that Nicole's and my synergy is the reason that things are the way they are. So I can't label it just as women, I think that it's just who we are. One of the core things I wanted to do with the restaurant, our mission, was about making it different. It was fundamentally important to me.

Coming with the local food, we're obviously protecting the environment and supporting our community. The first Monday of every month is called, "First Mondays" where the restaurant is available for not-for-profit to use the space. And working with the homeless to hire people coming out of homelessness to support them in being a stepping stone to living a more independent life.

How do you feel you've fit in in Evanston?
We're ahead of the pack in that. So many people have said, "I've always wanted to do that. I can't believe you've done that in Evanston." We have so many new restaurants coming here and we've really set a precedent of what can be done outside the city.

What have you learned in the first year?
I've learned to trust my instinct, to trust myself, and go with my gut. In terms of the restaurant, how to fit best within the community and give people what they want. We just started taking early reservations. We learned a lot about our beverage program. That was probably the biggest thing in the beginning we focused on after we opened, we weren't happy with it. The biggest thing I've learned is for all of us to stay focused, keep everyone involved, and to know that every single person that sits in our dining room are the most important critics you'll ever have.

Is there anything you might have done different if you had to do it a second time around?
It's a tricky question because we took over an existing space and that was all part of the mission being of environmentally friendly and using what was there. We didn't realize the challenge of having two kitchens. We knew we wanted to do shared plates long before we had that issue—we would never been able to operate the restaurant without (serving shared plates). How do you time the food coming out to one table from two totally separate kitchens?

How has lunch service gone?
The idea was all-day dining (on) Fridays, Saturdays, and Sundays and we quickly learned that we couldn't do all-day dining because we only use our front kitchen for our lunch menu. It went from all-day dining into lunch even though we didn't want to call it that, but its what guests called it. We've skipped Sunday (and) we're doing a more traditional lunch period.

What other changes do you have coming up?
We've changed our hours: Originally we opened at 3:30 p.m. and then we switched to 4:30 p.m. and we just switched it to 5:00 p.m. We tried to get the city let us keep our sidewalk seating open all winter. We put heaters out there because we figured, "if they do it in London and Paris, why can't they let us in Evanston?" But it will take us a year or so to get that changed.

For somebody who has been in the business for so long, what is the takeaway?
The takeaway for me is to stay true to myself. It never would have worked if it wasn't so personal for me. I thought out of the box about how things are supposed to be done and did them the way I felt like they needed to be done. And I think that's one of the things that made all the difference.
· All Found Coverage [-ECHI-]
· All One Year Ins [-ECHI-]