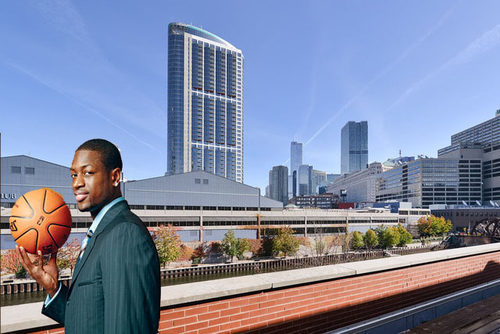 RIVER WEST—Celebrity Real Estate events are primetime for corny throwback photoshopping. Dwyane Wade gets the royal treatment this time around, as he just listed his gated riverfront townhouse for $1.8M. One Curbed observer thinks inhabiting one of these units is akin to living in a hotel, and the pics don't refute that.

EVERYWHERE—Renters Week 2013 is on its way out, but that doesn't mean you can't still cherish the moments. This year we dallied with rental architecture, neighborhood renter's guides, penthouses, historical ads, and had go at one of our Craigslist intensives.

BARRINGTON HILLS—Ever wonder where royalty stay when passing through Chicago? No, not the city but rather this bucolic 22-acre aristocratic "farm" 20 miles north. Alright we're exaggerating, but Prince Charles and Princess Diana did reserve the place in the mid-80s. And John Hughes, who counts as cinema royalty, filmed parts of Dutch here too.

FAR SOUTH SIDE—The mayor and CTA revealed some pretty spiffy designs for a gargantuan overhaul of the 95th/Dan Ryan Red Line terminal. We take exception with the "Miss Universe" crown laid over the station's brow, as one reader so aptly described the architectural adornment. Otherwise the station's an airy, Miesian delight and a major improvement on existing infrastructure.