Share All sharing options for: Alex Bachman's Fernet and Cola at Billy Sunday

As part of Eater's second annual Cocktail Week, bartenders at five Chicago restaurants or bars made a special limited-edition cocktail, served just this week. Today we introduce the Fernet and Cola from Alex Bachman at Billy Sunday. 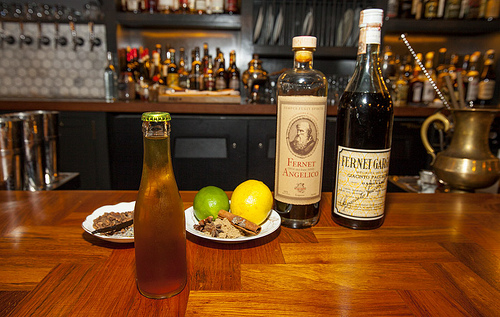 Alex Bachman is known for crafting house-made takes on simple cocktails, such as the popular gin and tonic at Yusho. For Cocktail Week 2013, Bachman created a bottled Fernet and cola at Billy Sunday, employing scratch-made cola and two types of Fernet.

Bachman begins by cooking down a variety of ingredients, including lime zest, lemon zest, orange zest, kola nut, lavender, vanilla, star anise, and cinnamon. Then he brews the mixture with molasses, brown sugar, and champagne yeast. After a two week fermenting process, he adds Fernet Angelico and Fernet Branca and force carbonates the blend in a keg for four-to-six days.

"We are well known as having a profound love and respect of Fernet and reconcepting Fernet and cola is a great way to bring people into the fold who are unfamiliar with the product," Billy Sunday proprietor Matthias Merges says. "Our end product is much drier then its more mainstream counter part, we are able to curb some of the bitterness from Fernet with out its losing its potency."