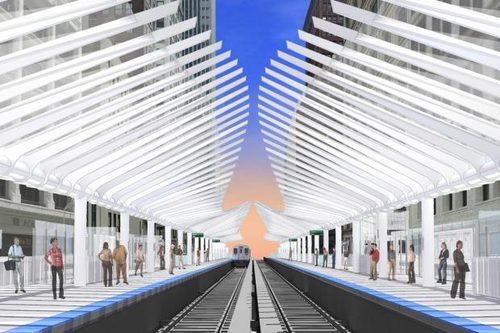 THE LOOP— A full cohort of renderings has gone public for the planned CTA Loop Station construction at Washington & Wabash. Expected to run up costs of $75M (nearly the combined cost of the new Morgan station and pending Cermak station), this'll be a real modernist frenzy and a leading station in terms of commuter volume. Look for construction in fall 2014.

EVERYWHERE— Nine months is too long a span to go without a celebrity real estate map update. We promise never again to perpetuate such a drought. A lot has happened with local and international celebs and sports figures in 2013: Blackhawk Jonathan Toews and political mastermind David Axelrod sold waterfront condos; a couple of guitar heroes made moves; and Jay Cutler is renting in Winnetka, among other oddities. Check it out!

GOLD COAST— As good a representative of "genteel decay" as any has listed for sale in the Gold Coast. Even better than the incredible, semi-affordable opportunity to restore and update an 1868 row house is the architectural lineage: Dankmar Adler, of Adler & Sullivan, designed this home and it looks like his original client may have been the last to live in it. The ask: $985K.

EVERYWHERE— Dig into Curbed's affordable bungalow tour, our periodic voyage into the land of average, unsexy real estate that normal folk can relate to. Within these constraints, we're still intent on delivering some of the top listings.