Born and raised in Lucca, Italy, Vince Masini immigrated to Chicago in 1955. He immediately took a job as a bar back at Italian Village before he was 20 years old ("no one said nothing, but you're not supposed to know that," he quips) and has amazingly been serving drinks at the upstairs bar since 1958. Masini, 74 years old with three children (50, 49, 44) and six grandchildren, is strictly a lunchtime bartender now. He chatted about his time serving drinks, the old days, and how the Italian Village, drinking habits, and cocktails have changed during his remarkable 58-year run in the industry.

What keeps you in the industry after all these years?
The family has been great, the customers are friends—if they're not friends, they don't come back. That's why I don't want to quit. I tried to quit almost nine years ago and the boss said, "what the heck are you going to do at home?" I left on Friday and went back on Monday. They told me, "work whenever you want to, as many hours as you want to, as many days as you want to."

When you first started, what types of drinks did people order?
Back then, drinking for lunch was normal. We made a lot of whiskey sours, old fashioneds, a lot of crème drinks, brandy, grasshoppers, vodkas, we made them all. Most bartenders today only know how to make the fancy little drinks. The new guys know how to make none of the old drinks.

You sell less cocktails nowadays?
Yes, especially at lunch, but even at night. They make the liquor lists in the morning and it's nothing like the old days. We used to sell more (liquor) in one day than we do all week now. 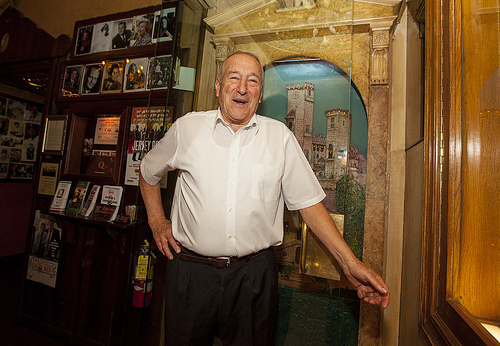 What types of liquor were popular back then?
Vodka was not too popular. Because we were so busy, we would prep about three gallons of martinis just about every day, two gallons of Manhattans, just about a gallon of vodka martinis, the rest you made by order. We used to sell so much that you couldn't keep up. We had a special that if you came before noon you would get three drinks for a dollar. People also used to have after-dinner drinks all the time. Guys used to drink rusty nails and stingers and cognacs; girls used to drink sweeter stuff.

How much did drinks cost when you started?
We had the special; regular price was around 60 or 65 cents.

Did people drink a lot of apertifs or limoncellos?
No. We didn't even have a limoncello back then. Galliano was popular, now you don't even sell it anymore. As far as sweet stuff, the most popular liquor was Strega. I don't think anyone knows what it is anymore; we have it and probably sell a bottle a year. We used to sell Drambuie, B&B, stuff like that.

Why do you think people drink less at lunch now?
Back then, if you went back to your office and passed out in back, nobody said nothing to you. Now, somebody takes their customers out, you're looking at each other, you'd like to have a drink, but unless the customer orders something first, you do not because you're afraid they'll judge you and say, "this guy drinks for lunch."

Did you have any famous people or movie stars come in back then?
We did and we still do. We had a lot of football players back then, especially when Mike Ditka was playing. Back in those days they didn't make enough money so in the summertime the financial companies would hire them. Ditka used to come around, (Dick) Butkus, Gale Sayers, Brian Piccolo. Plus a lot of movie stars, opera people, a lot of the actors and singers in the theaters; they were mostly Italian. And Jackie Gleason was here, but they would bring them to a private area if they wanted to be left alone and close the door.

Do you make those "fancy cocktails" now?
We do those things too but a lot of them are at night. We prepare the stuff but we rarely sell them until after I'm gone. They have all these weird other drinks now. 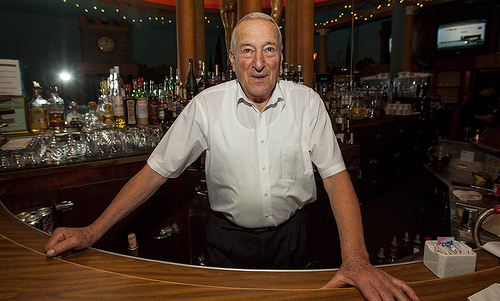 Do you think people are friendlier now or less friendly?
The people we have right now are absolutely great. We have a lot of lawyers coming out, judges, bankers and brokers. They come by the house, we go hunting together, you know everybody on a first name basis. 99.9 percent you love and respect every customer or else you would not be there that long. I've been doing this so many years but sometimes I still wonder, "am I doing everything right?"

How is business now?
It's not like the old days where we'd open the door at 11:00 and at 11:05 you couldn't get in the place—that's how it was for at least 30 years straight. There were not that many places downtown back then. Maybe we were not that good but we were in the right place at the right time.

How has the restaurant itself changed?
The one upstairs is exactly the way it was when they opened it up. The one on the main floor was totally redone about 20 years ago. They keep the place up very well but they want to maintain the same look.

Is there anything you would bring back from all the years you've worked there and have it be like that now?
I would bring back what it used to be—fun and you made lots of money. I don't know nothing about life, but basically what I'm doing today you'd have a hard time making a living. Back then I managed to send two kids through college, nowadays you couldn't send a kid through kindergarten. But those days are gone, you can't bring it back.

If you would give any advice or say anything to the bartenders nowadays, what would you say?
Go back to school and get a job where you'll have a real future. We came to this country and didn't know shit about anything. My dad used to make pizzas and things in the old country; they brought me to this country and brought me to a restaurant. You're young and you realize that "this is my future." If this is what I've got to do for a living, do it well, don't ruin anyone's day, make the best you can.
· All Cocktail Week 2013 Coverage [-ECHI-]
· Italian Village [Official Site]