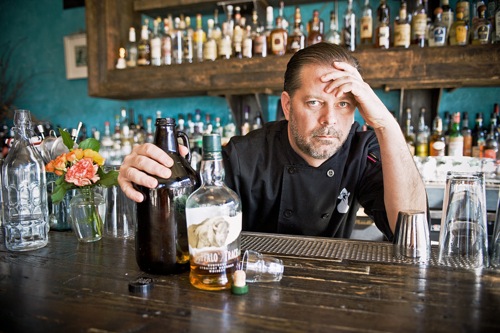 John Manion calls the confluence of circumstances leading up to La Sirena Clandestina "dumb luck." After a childhood partly spent in Brazil and then working in local restaurants for 18 years, Manion had several plans fall apart before a popup lead to the concept and current space on Fulton Market. A year after opening, Manion continues to push forward and iron out a Latin concept that has drawn good reviews, a strong industry following, and 20,000 empanadas sold. Manion talked about the beginning, changes in the first year, and what he hopes to accomplish at La Sirena Clandestina in the future.

So, explain the dumb luck part.
I was out in the wilderness for a while. I knew I wanted to do a more personal place, my own place. I did consulting, I did fixer-uppers, which is not the fun part of the job. I had a place lined up in West Town, negotiated for six months, signed on the dotted line, and they backed out. So we did the pop-up here, we only sold tickets through social media and it sold out within 40 minutes. It was magical. So when I say dumb luck, it was just fortunate that we ended up joining forces at that time.

How did it go when you first opened?
In the beginning, we didn't have a PR firm, we didn't have the luxury of having professionals come in and build the place. By the time we opened it was like, okay go. I think good cooks figure out what you can do within the parameters of the physical space. We bit off a little more than we could chew the first couple weeks. Philosophically, I don't know that we've changed anything, but I think we've gotten a lot better at it.

The menu has changed since then.
We're actually changing the menu format in the next couple weeks but we're waiting on graphic design (Nitewerk is the designer). We have four categories, which are De La Calle, De La Casa, Parilla Y Playa, and sides. A month and a half ago we realized that those categories don't make sense anymore.

What have been the most popular dishes?
Empanadas. That's a big surprise how many we've sold since the beginning. At the beginning I was folding so many empanadas, I wanted to get a T-shirt made that said, "Empanadas are killing me." Grilled prawns are a nice surprise. It was something that I thought I could keep playing with and changing but people were like, "Do not change that."

Did you expect the cocktails to be this successful?
Justin (Anderson) and I worked together at Branch 27, which was really his first job bartending and doing cocktails. He made this drink that was like, "What the fuck, you've gotta be kidding me." I don't know where he comes up with the stuff—they're singular and they really fit into the room, the concept, and what we're trying to do.

You guys have really become an industry destination.
If you hang around as long as I have, you kind of know people. The bar is a big draw, the wine list is funky and weird. I think the room has a lot to do with it. When it dies down we get a lot of cooks who come in here to have beers and shots, and you can sit wherever you want and you don't have to order anything. You can hang out all night (until 2 a.m.).

You started taking reservations six months in. Why?
I've opened a place as a chef before, but never as a chef/owner. To be honest with you, we just didn't know what we were doing. It's like, let's just open up the doors and we'll seat people as we can. But when you have someone on the phone who wants to book a table for eight people at 8 p.m. on a Tuesday and you say no? It just seems dumb.

If you didn't know what you were doing then, do you know what you're doing now?
I think we've made smart decisions, I really do. Taking on the late night. With lunch, the jury is out, but we're going to get there. For dinner, I know how to reach people for service, but for lunch, there are tons of people working in offices. The guy in the office who's never been on Eater in his life but wants a sandwich, how do we reach him?

What are you hoping to do in the future?
We know who we are, and we need to strive to be better at what we do. For a minute there, when you open, you're just trying to keep your head above water. But now we've got a staff in place and we can do some more interesting things. With the bar, Justin was pulled a hundred different directions for a while. Now he can really focus that program, changing the drinks a little bit more and just trying to be great at it.

We're going to program a little more music than we had. The Monday nights, the Los Inmortales nights, they're kind of magical. They're infrequent and off-the-radar but I think we can do more with that.

We're also looking for another spot to do something a little bit different. When I set out to do a restaurant, it wasn't necessarily to do this kind of coastal Brazilian flavor but the space just fit. But the next thing, whether it's a bar or more seafood-oriented, it'll still have those flavors.
· All La Sirena Clandestina Coverage [-ECHI-]
· All One Year Ins [-ECHI-]
· La Sirena Clandestina [Official Site]