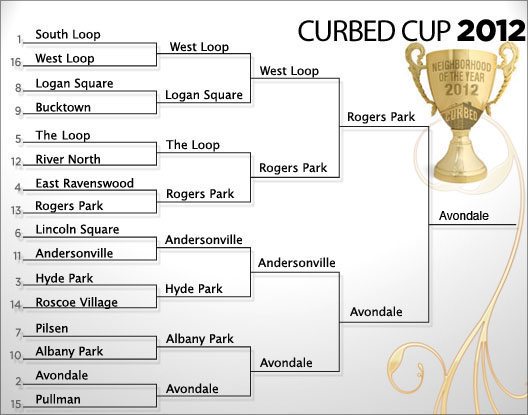 AVONDALE— The Curbed Cup is over after three weeks of oneupsmanship, ridicule, bravado, and celebration. The reader-chosen neighborhood of the year is Avondale, for all its strides in development, food, and the arts. Congrats! Just 12 agonizing months til the next one.

EVERYWHERE— With all the development geeks buzzed about the parking-free rental tower going up at Ashland & Division, we thought it apt to throw together a map of all the sizable new residential construction we know of that dispenses with parking. We'd like to call it a trend, but it's still premature.

STREETERVILLE— Everyone's pretty antsy regarding the fate of Bertrand Goldberg's Prentice Hospital. The city and Northwestern are dug in on one side, with preservationists on the other. While awaiting further court rulings, the Save Prentice Coalition put together another document touting reuse proposals. They've done some math this time too, helping justify a change in direction for NWH.

EVERYWHERE— Over the holidays, while the site was sleeping, some awesome real estate was sold. We chose the three coolest sold properties for our little round-up: a Gold Coast mansion opposite the Archbishop's Residence; the raw penthouse in the former Montgomery Ward Observatory; and a crazy mod duplex. See for yourself!