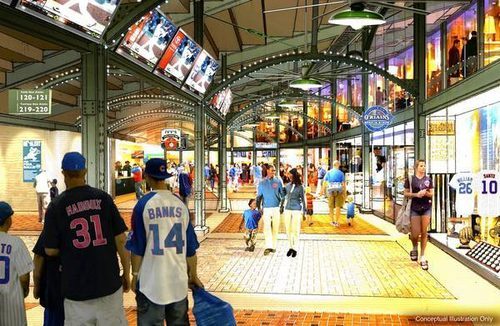 WRIGLEYVILLE— After a long period of silence, Wrigley Field's owners have released conceptual drawings of $300M in renovations to the historic ballpark. And they're willing to drop pursuit of taxpayer funds in exchange for the city's loosening of restrictions to commercial activity in and around Wrigley. Whether or not they should be congratulated, Rahm seems to dig it.

RIVER NORTH— The $1B, three-tower proposal for Wolf Point has cleared its first major hurdle, scoring the blessing of the Chicago Plan Commission over vocal neighbor opposition. Phase one will involve construction of a new stretch of riverwalk and the 525-foot west tower.

EVERYWHERE— January's edition of Archigames is over and done, and the Chicago's reader-chosen Beaux Arts masterpiece is the Wrigley Building. It was never close, as Wrigley dispatched such heavy hitters as the Majestic Building, Jewelers Building, and Union Station. Relive the excitement!

EVERYWHERE— A Presidential Library is a big thing, even though its economic impact is dubious. Should Obama's come to Chicago, it'll almost certainly come to the South Side. Given a handful of plausible locations, Curbed asked readers to select their favorite or make a case for other unnamed sites. The responses didn't disappoint.

BRIDGEPORT— Lest we're misinterpreted this week's 5-alarm Bridgeport warehouse fire was itself not awesome, but its icy aftermath sure is. Check the photos!