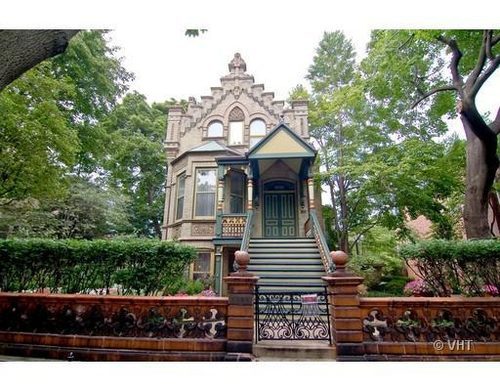 LAKEVIEW— One of our all-time favorite homes finally sold this week, for far less than sought. The Henry Rohkam house, named for a captain of the 19th century terra cotta industry and decorated in kind, fetched a hair over two mil after hitting the market for $3.9M in 2008. Have a last look at the ornate wonder.

HAMLIN PARK— Ready for some REALLY BIG STUFF? The first incarnation of the CHA's Lathrop Homes redevelopment plan is out! Ald. Scott Waguespack has already expressed concern over heightened density: all three draft versions step it up considerably over what existing stock would allow. But they also present lively greenspace, attractive public ways, and retail possibilities. See for yourself!

STREETERVILLE— There's a new and improved set of renderings available for SCB's 435 North Park tower project. They don't reveal a ton of new info, but they do position the 54-story building in clearer context. Site prep is underway for what's to be a timid replacement for the failed 90-story Waldorf-Astoria tower. Hey, at least the market allowed for something on this prime riverfront parcel.

RIVER NORTH— Curbed hit the pavement, cameras blazing, for some choice photos of another SCB-designed building. This one's in full flight at Hubbard and Kingsbury. Developer Habitat Co is aggressively spreading its brand of formulaic rental high-rises, and this 43-story, 450-unit specimen will wind up looking much like its older brother Kingsbury Tower just around the corner.