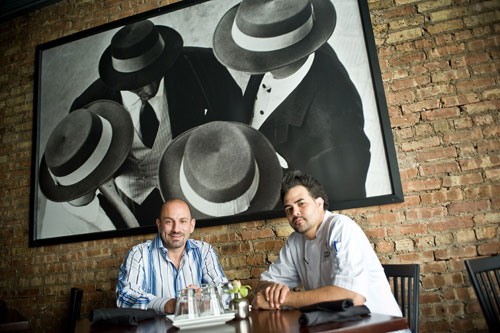 Following a very successful career in publishing with a focus on digital ad sales, Paul Cannella felt like he needed more. He didn't want to look back after another 10 or 15 years and wonder what it was all for. So he left the corporate world with a goal of building an empire of bars and restaurants. His first venture, Scarlet, is one of the most popular spots in Boystown. After seeing its success, Cannella turned to his family for inspiration to open his first restaurant, Taverna 750. Taking over the former Cornelia's space, Taverna is inspired by old family recipes and Cannella's grandfather's upscale Italian restaurant, Grand Tap Room, which was around in the 1930s and '40s. Looking back at Taverna's first year, Cannella talks about his love for the restaurant, getting inspired by neighbors and looking toward the future.

How has the first year been?
It's been a great learning experience and phenomenal business-wise. I've never owned a restaurant before so it's like getting a four-year college degree in a year. It's been good and positive and I've learned a lot. Business wise, we're over 55 percent up from last summer. We really got on the map with a lot of people both local and citywide . I think we've been able to do that with our Zagat rating, Open Table and more. It's not just a local Boystown restaurant. We've been able to reach out across the board. Concierges send people here from downtown if they're going to a Cubs game.

Why did you want to open Taverna 750?
I'm a believer in not listening to people complain about things if you're not willing to change it. I wanted to go into business for myself. I then wanted to have revenue streams. My goal was to have 10 bars and restaurants and the next eight will likely be restaurants. I want to build up a restaurant entertainment group.

Does it feel like it's been a year?
It's funny. I laugh when people say time flies, but since I've been a full-time entrepreneur, these are the longest and most-full days and year of my life. There's always so much going on. Everything is just so full. So when a full year turns – this is the five-year anniversary for Scarlet – and it feels like 10. There's just so much that happens in the course of a day and you look back. I like to travel and squeeze in fun, but business-wise time moves really slowly [laughs]. It's good, but it's a different perspective.

How was the actual opening? Were there any memorable screw ups or did things go smoothly?
When we first opened, we had to hit the go button because we had an event and money was running out. The city wanted us to set the doors back and we had to wait to put in the storefront. The first week it was basically like 2x4s on the façade and we took black fabric and our host made curtains out of bolts of fabric and a staple gun. So that was our façade and our contractors painted everything black. The curtains were gorgeous and looked amazing. But maybe the moral is that whatever you're facing you have to be innovative and find a solution to it.

Did you get any backlash from people who had been fans of Corenlia's, which had been in that space forever?
There were a couple people maybe before we opened asking what we were going to do and loved a certain entrée. But for the most part people are intuitive and knew it was time for a change. Things had gotten dusty and cluttered and people knew it was ready to go. People have come back in and have been blown away by the change. Everything is brand new except for the tin ceiling.

About six months or so after opening, you announced Christopher Coker as the new exec chef. Why did you make a change so quickly?
It was maybe a little bit later. He came on around February or March of this year. It was about seven to eight months. Really what happened was we had a young chef and he was super creative. You could hand him three ingredients and he'd tell you 100 things you could do with it. He was lacking the business side in terms of organization and leadership and scheduling. We had hired a chef consultant to complement him and push him over the edge and it became apparent we couldn't open with that chef. We then hired the consultant who is a catering chef. He stepped in and pinch-hit for us. It was never meant to be permanent. He did it for several more months than it had been planned. We then found Chris who was at IPO at the W.

How has Chris worked out?
Absolutely phenomenal. Chris really has the balance of being creative and while he doesn't have as much experience on the business side he's totally open to learning. In weekly meetings, if a food cost issue comes up, he'll come back and say he'd called two other vendors or whatever. He wants to continue to learn and grow. I just told him that I'm really proud of him that he's really growing and will be a well-known chef one day. Hopefully he'll continue to work with me [laughs].

Charles Joly, who is now at Aviary, helped with the original drink menu. You then tapped Tim Lacey to revamp it. Why didn't you go back to Charles?
So Tim and Charles were partners in Angel Share Mixology so it was their drink consultancy that worked on it. Since then they've dissolved that and Tim is moving into full-time consulting. Tim is continuing to work with us on the drink menu.

Other than the professional side, how has it been emotionally having a small neighborhood restaurant?
It's very different from the bar. The restaurant is very neighborhoody. The sidewalk café and garden ... a friend of mine maintains it and it's absolutely beautiful. It's amazing how it allows you to connect with the neighbors. They thank me for investing in the neighborhood. The people across the street asked if I own the place and said that I've changed their life. He said he'd been living here 10 years and now he wakes up and this is the first view he sees. Before it was a janky garden. Now he starts his day with this view. It's a cool feeling and the spectrum of people is much different from Scarlet. It's local residents—gay and straight. It's been cool to feel part of the neighborhood. Sometimes I'm out there sweeping in the morning and I feel like a little Italian shopkeeper.

What's been the best part of having Taverna?
Eating there [laughs]. I eat there sometimes seven days a week. I really do enjoy eating our food. When I go out of town, I eat there the night before and go straight back from the airport. It's inspired by my grandfather and to see that inspiration come to fruition is really moving. I'll have relatives come in and they won't tell me, but then send me a message tell me they're proud of me. It's really moving.

And the worst?
The one thing that I'd say is in order to continue to grow, we need to hire more management-tier people. The reason for that is I'm hitting the point of maximum bandwidth in my brain. I'm hitting the point where I'm not focusing on strategy and direction on the next thing, but instead focusing on [the little things] like sending in an ad, paying bills, etc. But there's a good foundation there and it's good have a base of successful businesses and revenue to get to that point.

You already had Scarlet, which is a popular Boystown bar. But what big lessons did you learn in the first year about running a restaurant?
Costs. They can sneak up on you really quick in terms of labor and food costs. It's really important to make sure you get an accurate log from both front of house and back of house staffs. Running front of house is a little easier. But the food and labor was hard. I didn't really know how many people should be back there cooking; is it 10? Is it 2? I'd say just controlling cost is the biggest thing.

What's next for Taverna, or you – any expansion plans or new projects?
We've poked around with some ideas of more Tavernas. That's a relatively easy thing to do. I don't know if that drives me passionately. I have never envisioned of having a chain. If we did another one I'd like to give it more of a unique spin by its location. Maybe more chops heavy. I've been approached on a couple of different places. Someone approached me about something in Andersonville and Lakeview. Nothing solid. Maybe next year is probably the timetable.