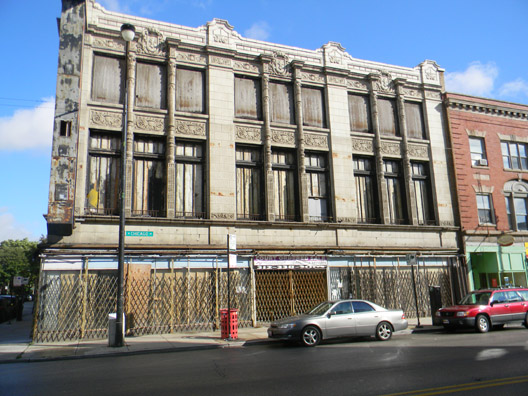 EAST VILLAGE— It looks like the downtrodden Amber Building's potential will finally be realized. The structure, near the corner of Chicago & Ashland, has been at the root of development rumors for many moons. It now seems that new owner Building Blocks, Inc., an architectural firm, has firm plans for a restaurant/brewery operation topped by office space. Bring it on!

NEAR NORTH SIDE— A high-floor 3-bed condo atop the Michigan Avenue Four Seasons is making an aesthetic splash, to say the least. The overdose of mirrors led one commenter to deem it an "80's coke palace". It certainly has an uber-cool disinterested demeanor. The bottom line is, at $1.5M with sensational views and amenities, you could do worse.

EAST VILLAGE— A bout of rumormongering has us and everyone else wondering if a Trader Joe's will move into the lengthy vacant lot at 1834-50 W Chicago Avenue. Stemming from the assertion of an on-site construction worker, will the neighborhood relish in a TJ's as the anchor for a 70-unit residential project? Or will there be another permutation involving a potential land swap? Got a hunch? Come weigh in!

GOLD COAST— Former Cubbies first baseman Derrek Lee, last seen with the Pirates, let go of his primo Gold Coast real estate the other day. On the market for 17 months, the ask dwindled from $1.35M to the closing price of $1.025M. The terrace-laden 12th floor 3-bed in the art deco Elm Tower has great views and crisp interiors. Have a look-see!