And now, the latest from Racked Chicago, covering shopping and retail from the sidewalks up. 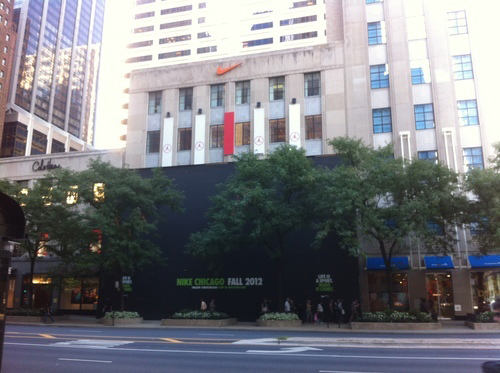 [Niketown Chicago with a construction barricade]

STREETERVILLE - It's been months of sketchy details through the mysterious remodel of Niketown Chicago on Michigan Ave. This week some concrete deets were released about the high-tech features and the store design itself.

GOLD COAST - Starbucks on Rush href="http://chicago.racked.com/archives/2012/01/11/famous-starbucks-moving-in-april-pretty-sure-theres-gonna-be-starbucks-alcohol-yay.php">is moving up the street to make way for Madewell. Now ALDO is moving out (destination T.B.D.). There's no massive shoe sale on the books and we agree it isn't that much of a loss, but it does raise curiosities about a new tenant.

CLYBOURN CORRIDOR - The growth of the Cabrini Green area was imminent and according to the news this week,it'll go "gangbusters" within the next five years. Look forward to a Mariano's supermarche, Nordstrom Rack, Dick's Sporting Goods and a 14-screen ArcLight Cinema.

GOLD COAST - Chicago-based design house, Atelier AZZA celebrated its one year birthday. This is a photo of the cake.