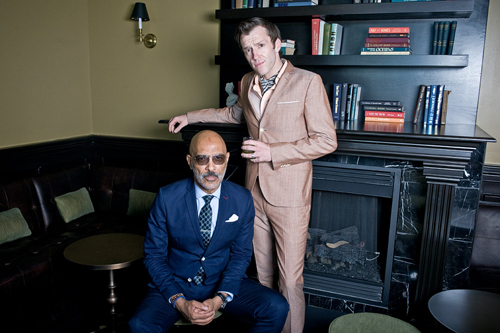 From the moment Drumbar opened in early June, it had a line. The posh rooftop lounge at the Raffaello Hotel, reminiscent of a regal drawing room in a fancy friend's home, has managed to draw a cool crowd and keep the d-bags at arm's length. Much of that is due to two stylish guys: VP of nightlife, and British import, Benjamin Newby and consummate door manager, Lono Brazil, who has been a fixture on the nightlife scene from Chicago to New York to Tokyo for more than 30 years. This well-heeled and well-connected pair ensure Drumbar has a well-balanced mix of patrons from Logan Square hipsters to chic 60-somethings to glamour girls out for a night of frolicking. Eater chatted up the duo to find out just how they manage to strike the perfect balance every night.

So how did you two come together?
Benjamin Newby: [laughs] I was at Underground and I put a job posting for a security guy. This older, well-dressed guy who could be my dad came in and I was like "who is this guy?" He said he was Lono Brazil and I was like, "you're joking." I could just tell when I met him that he wouldn't fit in with the Undergroun dynamic, which was a real shame. When was that – like 4-5 months before we worked together? Basically I began working with Drumbar and touring the venue and knew what I wanted to achieve and the key to that was having the right door guy. As soon as I saw Mr. Brazil, I knew he was the perfect answer. He had the international experience, is a great communicator, knows about maintaining an exceptional crowd, but also knows how to turn someone away. No one likes to be turned away, but you can minimize the amount of complaints with the right eye contact etc. I reached out to Lono and the rest is history.
Lono Brazil: I had gone back to New York and had a couple of things I was doing. I'm originally from Chicago and moved 30 years ago to New York and met another British fellow who was a legendary door man in New York and London, Michael Smith. I met him and he was head doorman at Nell's, which is where my history in working doors started in the mid-'80s. I maintained two residences; my eldest son was born in New York and is back in New York. I was thinking of giving New York another chance because there wasn't enough happening in Chicago, at least with places that get what I do. Ben shot me an email and asked if I remember him. You can't forget Ben once you meet him! Our [initial] meeting was very brief. Then six months passed and he kept his word that he would call me. I came back from New York and sat down with Ben, saw the venue in the process of being built. He told me the vision and I liked it and said I'm in.

How do you maintain that certain crowd and what's the best way to turn someone away?
LB: It's about being polite from the start. Everyone always gets treated that way whether they look incredible or not. We want to keep it as diverse as possible. The better parties have people from all walks of life. I want drag queens and midgets and circus clowns. It's like casting for a film. Our Thursdays are different from Fridays and from Saturdays. On Friday it's more diverse, with more after work people. Idea is to treat everyone exactly the same. Depending on when they walk up, we try to accommodate them. But we work with reservations and a huge list. Everyone knows Ben, but fortunately not everyone knows me so I'm trying to represent the brand effectively.
BN: What's great about me and Lono working together ... a lot of places the GM won't be on the door, but I make a point of being on the door half the night. You see it from a different perspective. We're not security. With security, people are always already a little anxious. With us, we are allowed to have a little more fun with it, but that it's also a polite interaction on our part. We always say kill them with kindness.

It's 9 p.m. Saturday. What's the wait for a table or to even just get into the bar?
BN: It's not that long. Our intention is to really keep the line moving. We don't want it to build up or let people wait that long. The easiest way is to make a reservation. Even when you do make a reservation it's still dress-code relative. It's not about being arrogant; it's just about creating a certain kind of environment.

How often are tables full that someone has to wait?
LB: like Ben said, I don't really keep a line out there. We get the ones with reservations ... we have radios and I know if something's going on. If I have a group who has a reservation, I sent them up. The process is very service-oriented and designed for the experience. If you walk up and you're not on the list, then I'll let you know it's not a good idea to wait. I'll also tell people the patio will close, so a lot of people who come just for the patio, they'll go elsewhere because they wanted to be outside. Other people, they'll say I told them to come back at midnight just to hang out inside. We all have business cards and we give them out and ask people to make reservations or to come back later. I always encourage people to come back another time. I never quote times.

Can you reserve areas on the patio and do you leave space open for walk-ups?
BN: We go to a point where we're fully reserved. There's always space for walk-ups and we stagger the times for the tables. We always leave a little window for VIPs and walk-ups, like contacts we know. We always have that flexibility. It's like a game every single night to keep everything balanced. We try not to take massive reservations on a Saturday night so we can then accommodate everyone.

What about that cool room just off the patio—can that be reserved?
BN: It all depends. You have to consider the rain situation as well. If people reserve outside and it rains, we have to accommodate them. When the roof closes, we do use the nook as extra hospitality experience. It's a great room and a great function. To have a dedicated server for that room, it's $3,000 but they get the corridor as well.

As a customer, is there anything I can do to make my wait shorter, like cash or gifts?
LB: Never. I've been offered $1,000 by guys who just don't look like they belong in the place, like guys who drive up in a Maserati wearing crocs and cargo pants with a cigar hanging out of their mouth saying (in a Chicago accent), "How much is it? Come on, how much do you want?" But I won't sell out the integrity of myself or the venue. Once that happens, we're finished. I want to see the longevity and don't want to let douche bags take over the place. Sometimes we'll get younger hipster types from Wicker Park or Logan Square or Art Institute students who don't normally hang out Downtown, but they'll have a style about themselves or their personality and we'll invite them in. It's a fun mixture that we're going for. If someone comes to the door and disrespects me, they'll be worse to our servers. It's not always what they have on, but it's also the personality.
B: Just be bloody well dressed! We also have cool 60-plus year olds come in who want to sit at the bar and have a martini or have a group of glamorous housewives who still have great spirit. I love that. We're always trying to achieve that mixture with different kinds of styles. It's nice to have a place where people can come and make the effort to dress up. We have that kind of crowd. That's why you need someone like Lono.

What about celebrities? Are they coming in?
BN: Kelsey Grammer came in for a baby shower, Florence & The Machine; some sportscasters; Radiohead has been in; Diego Boneta and cast of Underemployed; some Blackhawks ... we get the fair amount of celebs.

Do you have a lot of entitled people demanding they be let in or to go to the front of the line?
LB: They definitely always do [get mouthy]. No one wants to be turned away. We get packs of housewives or cougars looking for action, I'll send them to other places like NoMI or the bar at the Westin. When the types who come up ... I had a woman whose friend was going on and on about her friend was a big wheel, and I was joking with her that we have all kinds of wheels—big wheels, little wheels—I don't play into that. My tone becomes more professional. They're cursing me out and I just apologize. I get a lot of rich entitlement and people asking "What, isn't this just a fuckin' bar?" I just use my wit and sarcasm, I don't become combative. I don't turn it into a pissing match.
BN: That shows we made the right decision not to let them into the venue. So when people act like that it proves you made the right decision. A lot of times, you just don't react. If there's a group of guys who act feisty, we'll get security and they'll just talk to them calmly. You just don't get involved, especially when people have been drinking. You just try to show respect and it's not just about them. It's about the other guests in the line. You don't want them to feel there's aggression or negativity in the venue. They'll eventually just run out of steam.
LB: I'm there all night and they can't wear me down. They can stand there and I won't argue with you. I'll just be the same way.

What's the one Gatekeeper tool you need to do your job?
BN: Clipboard! For me, I need that to do the job
LB: I have to say it's that, too. It also gives me the luxury of being able to recognize names and greet people effectively. We get together earlier in the night and we know who people are. After seven hours out there, more people don't get in than do get in. We'll get a lot of randoms who just roll up. Now we have a lot of regulars who know me now. I recognize them and I'll see them on the clipboard.

When you're not at Drumbar, where are you drinking and eating?
BN: Aviary, Sunda, Rockit, I love the Mid to let my hair down. Sable.
LB: I've been around to most of the clubs now and I don't frequent one place, but I'll go someplace a DJ is playing that I like. I live near Drumbar and walk home every day. I go to places in the area: Drawing Room, Fred's at Barneys. I don't have one particular place. I like to try different things and try different restaurants