Nothing About Niketown; All About AT&T's Superstore; Everything on Fashion's Night Out!

Share All sharing options for: Nothing About Niketown; All About AT&T's Superstore; Everything on Fashion's Night Out!

And now from the experts at Racked Chicago, reporting on retail and shopping from the sidewalks up... 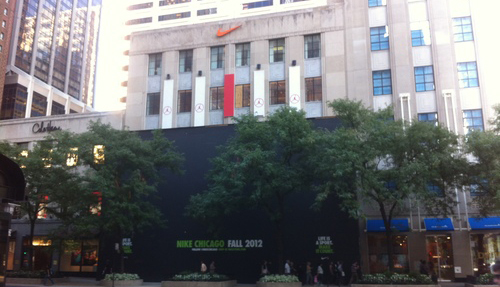 MICHIGAN AVE - With The Ave's new tech HQ concept by AT&T right down the street which isn't really focused on selling anything, Nike's Chicago Flagship, Niketown remains closed, under construction, also still not selling anything. Here's the latest on Niketown and when they might be reopening.

MICHIGAN AVE - As Niketown Chicago isn't doing anything down the block from Burberry, right across the street is the AT&T Superstore which is pulling out the stops with an entirely new concept set to open this weekend on September 1. Watch your back out Apple Store, Michigan Ave has got a new tech lifestyle superstore.

LOOP - Carhartt is about to open their second Chicago store; the seventh in the US. In preparation for the store's opening on September 8, the Carhartt team has asked Chicago's shopping public for "any and all feedback". We've opened up the comments section as a forum to tell them what you think of their new store in The Sullivan Center.