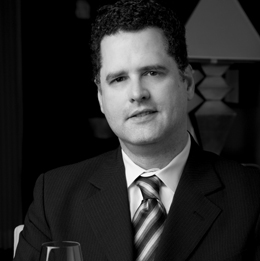 The truism about a good FOH person is they're generally self-effacing, always in service to the customer and generally never draw attention to themselves. But, often this means a good FOH is like a real estate salesperson, which is to say, they rarely offer their own personal opinion. They let the customer express an opinion or a preference and riff off that. But, in the real estate model, who's likely seen all the cases, good and bad? The agent knows the marketplace in a way the customer whose search is limited to a few homes, or a few home buying experiences, does not.

There's no such thing as perfect information, but the expert often has more information. And that's why I love Joe Catterson, GM and sommelier for the Alinea/Achatz LLC Group, because if he stuck to that old customer knows best model at Alinea and Next, he'd spend all his time recommending and hand selling certain bottles of dusty red Bourdeaux or White Burgundy, the trophy bottles, most of the refined customers at Alinea or Next are familiar with, the stuff they've got in their cellar or the stuff they've got their eye on at that next auction.

Instead Joe recognizes most of those wines are like Kim Kardashian, egocentric black holes unto themselves. Those big wines are meant to be savored on their own. The tannins, the alcohol and the fruit don't play well with subtle complex flavor, especially the kind of stuff that Dave Beran and Grant Achatz cook up. They might be OK for a hand-massaged-beer-fed Kobe cow ribeye that will suckerpunch you with earthy tangs and mineral-rich blood, but that doesn't work with a subtle deconstruction rife with lemongrass, orange, iodine and brine.

And so Catterson digs up what he knows, he matches funky oxidized small batch sherry with a turtle soup or Slovenian Veliko Bianco (who knew they made great wine in Slovenia?) with that orange and lemongrass broth. He's got the gusto to say, no, man, this is what's best with this dish. And generally, most of those pairings are as logical as serving ice-cold milk with a chocolate chip cookie. What really separates him is his discipline. He can rely on intuition and flavor memory to recall the perfect bottle, but the best pairings are often found through experimentation, which is to say, you gotta taste the dish and taste a series of wines to hone in on the one bottle that stands above all others.

But, who has the time or the cash flow or the discipline to do that, and to do that for 22 courses of a pre-fixe? Most restaurants say, "No way! Serve the Sauternes with the foie. That's what we've always done. It works. Move on." Catterson sits down and opens up the bottles and tastes until he finds the right one. Achatz and his team might prepare a dish a few times for the effort just so he's certain.

It's takes cajones to tell a group of diners, especially cosmopolitan ones who've probably dined at many if not most of the best restaurants in the world, what they should be drinking.

The thing about being so bold and so effective is you'd think Catterson would be a Kardashian egocentric himself, tweeting pictures of himself drinking grand cru from the finest cellars or pimping his acumen. But, of one of the best, if not the best sommelier in the world, little is known. Catterson, and he's probably different amongst the folks who work at Alinea, is one of the quietest even keeled humble dudes I've met. He could probably be a master sommelier, but he's never pursued it and I don't think he'd ever want to. Emerson said, "The reward of a thing well done is having done it." Catterson's delight comes from nailing the pairing or turning someone on to something they never knew, not the celebration of his skill. Hell, he'd probably hate that I've even written this. For him, serving others as well as he does, it ain't no thing. It just is.