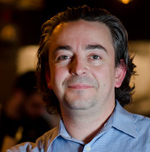 If you like the drinks at Yusho, you're going to love what's coming next. Matthias Merges, the chef/owner of the Logan Square yakitori-inspired spot, is reportedly opening Billy Sunday, a cocktail lounge in the same area, hopefully toward late October. Billy Sunday, named for the outspoken and wildly popular Prohibition-era evangelist, will have a focused craft-cocktail program led by Yusho mixologist Alex Bachman, and a food menu based on "old-time Sunday suppers," Merges said. [Tribune] (photo)