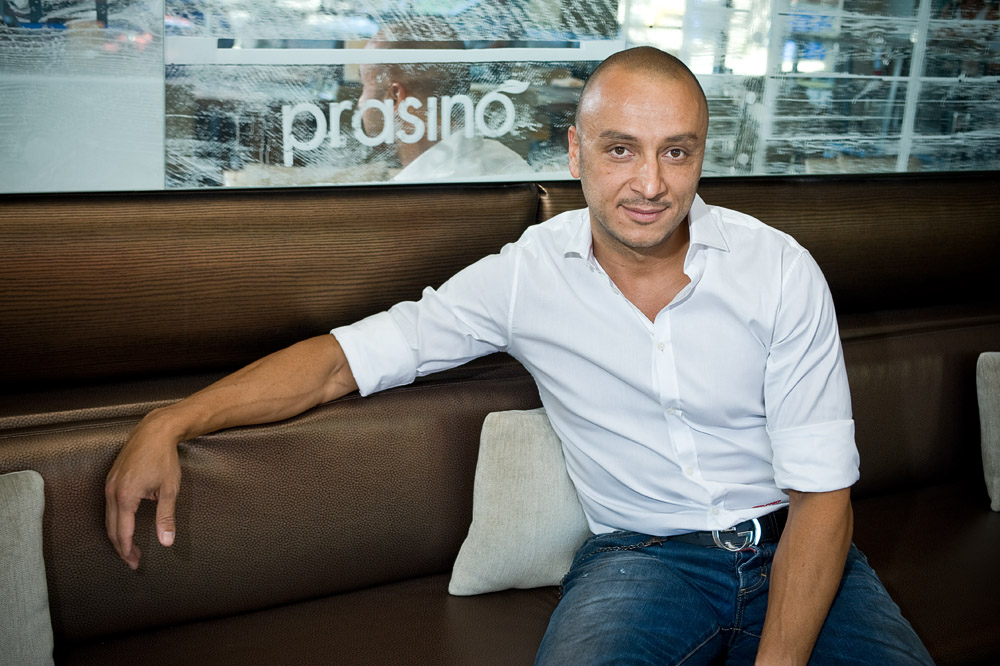 Despite wanting to have it be the first of his restaurants to open, Prasino in Wicker Park was actually the third. Owner Ted Maglaris explained that his family's healthy-focused, organic-leaning restaurant was set to go into its current space, but between landlord changes, city backups and other issues resulting from the economy, the city location was pushed back. Fortunately it finally opened on Aug. 11, 2011 and just celebrated its first anniversary. Looking back, Maglaris recounts some moments, like a taxi crashing through the restaurant's front window, as possibly a blessing. Looking forward, he's about to open Covo Gyro Market nearby

Are you doing anything to celebrate the anniversary?
No, other than our party for friends and family and VIP customers. Turnout was about 500 people. We had food stations, a saxophonist, it was inside and outside.

So how has the first year been?
It's been great. We were invited into the neighborhood. It's not like anything else in the neighborhood so it's been exciting. It's been a great customer response. We have people coming in sometimes twice a day. The patio is great with 130 seats and that's the big attraction.

Does it feel like it's been a year?
No, I mean, I guess yes and no. I don't know how to put it. I have another location (in suburban La Grange) so it seems like it's been fast, but that's been around for three years.

How was the actual opening? Were there any memorable screw-ups or did things go smoothly?
No, the part that was tough in the beginning was to find the right staff. That was challenging and it finally came around. In this business when you first open, if you're not in River North, you worry if it's going to be busy. I feel like that was only the real issue.

You had two suburban restaurants first. Why did you decide to open in Wicker Park?
We had St. Charles and La Grange; St. Charles closed. It was basically breaking even and at a big footprint it wasn't enough to support. I closed it and opened Wild Monk, a gastropub. Wicker Park was the original one I wanted to open from the beginning, but the problem was with the landlords. There were three different people who owned the building. It took that long to get my hands on it. I always wanted to go into this neighborhood for the patio and urban [feel].

Shortly after you opened, a taxi drove through the front window. How did that affect business?
That was a memorable moment. I don't know if it affected it. We closed the same day. We opened the next morning. More than anything it put Prasino in the spotlight and then my (security) video went viral the next month. Everyone was safe and no one was injured.

What went through your mind?
I was sitting in the lounge and I thought someone dropped a tray of dishes. As soon as I came around the corner ... I see a cab in the middle of my restaurant. The woman who was hit was already standing. There was a grandfather and daughter and I made sure they were OK, too. On a positive note, I've had a lot of publicity.

What's been the best part of having Prasino in the city?
The patio and the attention it draws. It brings people from the whole area and it's become a staple. I like it because people appreciate and love the food.

And the worst?
The worst thing ... me having to put away the patio at 12 and that we have to stop seating at 12. Everything else, with me and the city and ordinances, it's good. I have a nice place and I don't have any issues.

So you're opening Covo Gryo Market soon. How does it feel to get back to your Greek roots?
It's cool and exciting. It's more about, for me, bringing the right Greek street food to Chicago and this area. The processed gyro we eat in America, we don't eat that in Greece. I want to do it the way I grew up eating in Greece, where you pack the all-natural meat. That's exciting to bring and re-invent what gyros are supposed to be about. There are Mediterranean twists with American influences to cater to everyone's palate.

How will Covo differ from any place in say Greektown?
First thing is the meat is all hand packed, [we have] three different varieties: lamb/beef special, chicken and pork. Then I'll always introduce others like turkey. All of our meats will come from like Amish chicken or local farms with hormone-free meats. I have a lot of focus on décor that's based on the meat-packing district: metal, brick walls, reclaimed materials. I'm trying to elevate the experience. It's a totally different experience that goes with the same roots and beliefs as Prasino. I have a market. In the place, you walk up and order your gyro. You'll have five to six sides of the day, quinoa, tabouli, etc., that are vegetarian friendly. There's a little place in Mykonos that's by a beach and you walk up and it's like seven tables. This is what they do. I took my inspiration from that.

Finally, what are you looking forward to in Prasino's second year?
What I'm going to do ... I've gotten the kinks out. I'm building my breakfast. I have a lounge and what I'm going to start doing when the patio closes, we'll do live DJs with indie dance, house music ... just something for the customers to hang out. I'll do that Thursdays, Fridays and Saturdays, probably in October.
· Prasino Closed After Cab Crashes Through Windows [~EChi~]
· Video of Cab Crashing Into Prasino Emerges [~EChi~]