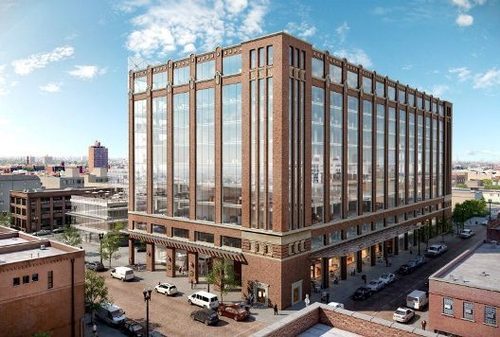 WEST LOOP— Fulton Market Cold Storage, now in Sterling Bay's hands, is undertaking a hugely significant adaptive reuse in the heart of the West Loop. Dealing with a complicated bulky structure, a series of new renderings suggest they'll bring an impressive amount of transparency to the now blank facade. And in addition, a new and connected 180,000-square-foot building should help them court desirable commercial tenants.

NEAR WEST SIDE— Right down by Union Station lurks a wholeheartedly-Egyptian condominium, complete with hand-painted hieroglyphic murals and a rustic crypt-like bedroom. Owner/designer John Robert Wiltgen is responsible for the brilliant hot mess. Come check it out!

GRAND BOULEVARD— National Registry hasn't done the Rosenwald Apartments much good. After 12 years of abandonment without upkeep, the 1929 housing complex is on its last legs. Fortunately, a redevelopment prospect has rolled along in the nick of time, and, with the city's blessing (read: TIF funding), 331 upgraded units will reopen in a couple years. We got ahold of some early renderings. Yay!

NORTHBROOK— Journeying to the North Shore, we checked in on the re-listing of a mega mansion on 3+ acres once owned by illustrious Bears QB Jim McMahon. It's back with a vengeance— asking nearly twice what it sold for just three years ago. It was a wealthy recreationist's dream then, and it is now.

The Chicago Restaurants and Bars Requiring Proof of COVID-19 Vaccinations