Last week, the Chicago City Council passed the somewhat controversial new food truck law, which among other things, finally allows food truck owners to actually cook and prepare food on board. While the measure was overwhelmingly passed by the city council, reactions to the law are mixed. Many food truck purveyors are displeased with the restrictions, especially the provision they can't park within 200 feet of any brick and mortar restaurant and the requirement to install GPS tracking on the trucks. In the Loop that means there are very few options to park during prime hours and the easy ability for trucks to possibly get fines.

"The 200-foot buffer from restaurants prohibits us from being able to reach customers in high-foot-traffic areas like the Loop," said Amy Le, owner of the Duck N Roll truck. "We struggle to legally park now in the Loop. If more trucks enter the market and there are fewer and fewer places to park, we are going to essentially cannibalize each other."


A number of other truck owners share Le's feelings. "The fines for being within 200 feet of a restaurant are higher then health violations [for] carrying marijuana. I think it criminalizes our industry," said Nida Rodriguez, who owns the Slide Ride truck. "On the consumer side, Chicago is dictating consumer lunch choices."

With the passing of the law, the city will work with the Chicago Department of Transportation to set up a minimum of five food truck stands, essentially permanent spots where trucks can park, in six areas of the city: Loop, West Town, Lincoln Park, River North, Near North and the Near West Side. 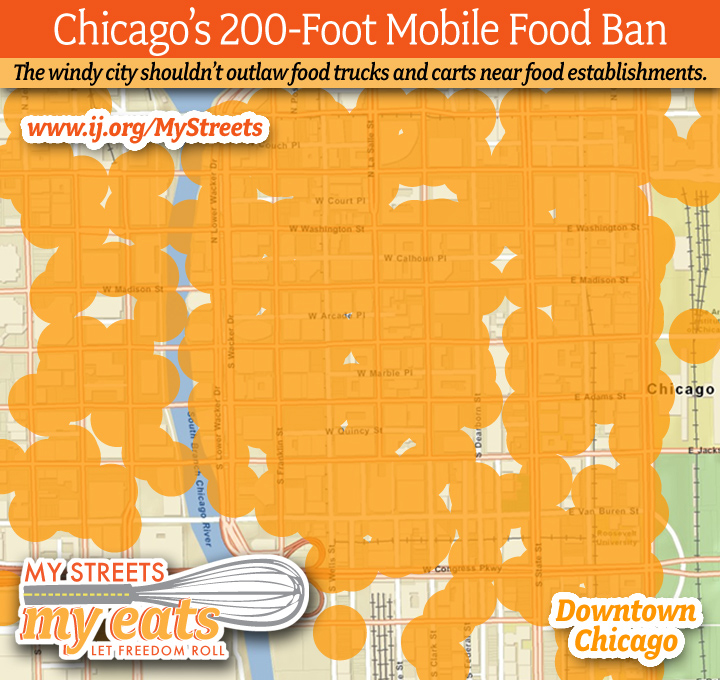 Trucks will be allowed to use these spots without worry of getting a parking ticket and can park anywhere else in these neighborhoods that's at least 200 feet away from any restaurant. And the 200-foot rule becomes invalid between midnight and 5 a.m. However this map to the right (zoom in by clicking on it) shows available space in the general Downtown area for the rest of the day. There's not a lot.

"Although a step in the right direction regarding being allowed to cook on trucks and the changes to late night vending, the changes aren't going to make a difference if there is no place to park on account of still having to stay 200 feet away from any established restaurant," said Phillip Foss, one of the earliest food truck proponents who shuttered his popular Meatyballs Mobile last fall. "The food truck business is heavily reliant on foot traffic during the lunch hours, and there is still almost no place for a truck to set up shop."

Brick and Mortars in the Game ... or Not


Big Star, a brick and mortar spot that has a food truck, has sidestepped the law by parking and cooking on private property, which is allowed. They have said they'd consider truly joining the mobile revolution when the city passed a law making it OK to cook on trucks. But even that may now not happen.

"It seems [the city] used the ability to cook on trucks as a bargaining chip to pass other restrictions," said Big Star chef de cuisine Justin Large. "Given that most people have invested quite a bit in the old model—serving pre-packaged—I'm not sure how much will change. That said, Big Star has no immediate plans to take the truck out on a daily route."

Alinea and Next co-owner Nick Kokonas, who has spoken out in favor of allowing food trucks to have less restrictions, said he is happy the law got passed. "So long as health standards are maintained, I personally would like to see [trucks] have greater freedom."

Rich Melman, the founder and chairman of Lettuce Entertain You, which owns about 50 restaurants in the Chicago area, isn't 100 percent on board with the idea, but doesn't say food trucks shouldn't happen. "I have mixed feelings," Melman said. "I like entrepreneurs to have the opportunity to do good things for themselves. I'm a little concerned they don't hurt restaurants. It'll remain to be seen."

That said, Melman added that at least two of LEYE's divisions are talking about adding food trucks; Wow Bao, a Lettuce restaurant chain, already has a mobile presence. "There's nothing you can do about normal competition ... If there's a hot area in the city, a lot of restaurateurs go to that area. And I think it's the same thing with this here."

Since trucks started hitting the road, there has been a boom in the last couple of years. Currently, there are 127 food trucks on the road; of that 55 are the newer "gourmet style" trucks like Bridgeport Pasty, Wagyu Wagon, Starfruit, Tamale Spaceship, the Sweet Ride, e. Leaven Food Co, Lillie's Q Meat Mobile., and more. And of that last group, 27 also own brick and mortar restaurants, according to Duck N Roll's Le. While there may be frustration, many people are still getting into the game. Hopefully the new restrictions won't impede that.


While there's been a lot of negative feedback on the law in the last few days, some view this as a victory in the fight that has been going on for more than two years. Matt Maroni, who, along with 32nd Ward Ald. Scott Waguespack began the fight the get a new food truck law in place before selling his Gaztro-Wagon truck, thinks this law is a good thing. Maroni explained that the 200-foot rule and GPS tracking were both in the original ordinance he and Waguespack introduced to the council and considers the passing of the law as baby steps in the right direction and an overall win.

"[The law] will grow and be amended, but it is a huge first step," Maroni said. "This is Chicago politics. You cant try to grab everything up front and be angry that all things weren't passed right away. The first step took two and a half years. My goal was to get cooking on food trucks for all of Chicago. This is a process and a long one. We have to look at the big picture when tackling something like this. One step at a time."
· All Food Truck Coverage on Eater Chicago