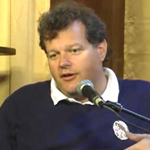 Chef Michael Kornick has been around the Chicago food scene for a while. He recently joined Mark Bazer for an installment of Bazer's live talk show, the Interview Show at the Hideout (up the street from Kornick's Ada Street). He discusses his career, his restaurants, being a pioneer in then-seedier areas of Chicago and the current food scene ... all in 13 minutes. [HuffPo via Grub Street]