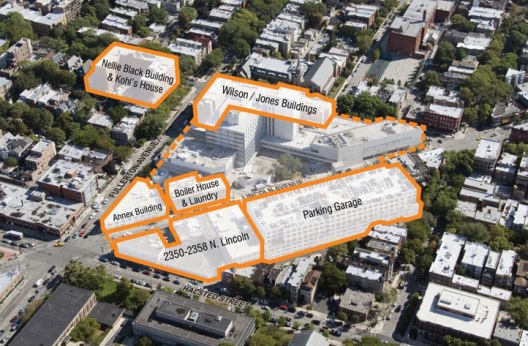 LINCOLN PARK— We're pleased to bring fresh news on the Old Children's Hospital site redevelopment. McCaffery Interests has recruited SOM to plug away at designs for reuse and new construction on the large and multi-faceted site. And, in doing so, McCaffery now hopes to up the heights on two proposed towers: from 16 to 21 and 20 to 25. A new 14-story hotel is also being batted around.

BUCKTOWN— Urban Treehouse is steamrolling its way to completion at Cortland and Hermitage, with seven luxury 3-bed condos to be ready by autumn. That's down from 10, but it's still a bright spot in a depleted condo market, and a darn handsome reuse of a prized structure. We found four units on the MLS. Come check 'em out!

WEST LOOP— Alongside the Kennedy, at Adams and Halsted, another apartment tower figures to rise in the not-too-distant future. The brainchild of White Oak Realty and FitzGerald Associates, the 33-story Greek-themed building would absorb a surface lot and be the tallest thing around apart from the Skybridge a few blocks north. Though it'll be a far lesser statement should NIMBYs get a stranglehold.

GOLD COAST— It's sad but true that rents are spiking all around town, but some targets are just laughable. Take this 6,000-square-foot duplex penthouse, for instance. It's asking $21K a month (down from $26K) and seems to have every intention of getting it. That's not unheard of at the tippy top of the market, but it's still the priciest rental on the market by a country mile.