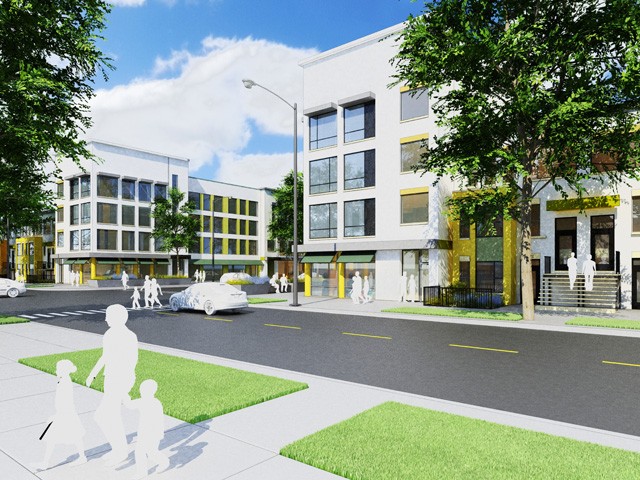 WOODLAWN— Yesterday, we revisited the South Side reconstruction of Grove Parc Plaza. The first phase of the 420-unit public housing replacement project, dubbed Woodlawn Park, finished up last year, and the second is about to get underway. The pot of money backing the project includes funds from every level of government. The 1960s section-8 buildings, designed by Stanley Tigerman, are being gradually replaced by mixed-income low-rise buildings that show less scorn for the street.

STREETERVILLE— This week in celebrities, Vince Vaughn officially listed his triplex penthouse in the Palmolive Building. The 12,000-square-foot lair discretely came on market for $24.7M last summer, but Vaughn dropped the price to $18.4M for MLS. Were it not for the absurbly-priced Trump penthouse, this would be the priciest listing in Chicagoland. It remains the stuff of dreams, mainly because no one seems to be able to catch a glimpse.

LOGAN SQUARE— Over at Curbed, we've got an occasional feature we like to call Please Build Here, in which we give ourselves license to ogle prominent vacant land around town, pitching ideas for a higher use. Earlier this week, we found ourselves along a dreary stretch of Milwaukee Ave pondering the promise of an irregular 15,000 sf parcel. Come have a look!

FORT SHERIDAN— An unusual deal is shaping up in the North Shore. Fort Sheridan, a vast community of repositioned military housing structures and new infill, is about to expand with news of a bulk sale of 15 Navy-owned duplexes and 4.13 acres of developable land. Each freestanding duplex has two 3-bed units and dates to the 1930s. The sets are sold separately or as a package for a combined $4.55M.