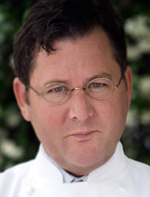 Charlie Trotter is being sued by a former Microsoft exec who said the chef reneged on a charity dinner. David Vaskevitch has won a default judgement against Trotter, who he said failed to deliver an auction item won at an event in 2000. The dinner was scheduled for fall 2011 but postponed due to the 9/11 attacks. Vaskevitch claims Trotter was unresponsive to calls to reschedule. Trotter said Vaskevitch didn't follow through on providing private jet travel for him and his team. Trotter now owes $63k for the gala prize, according to court documents. [Crain's]