Share All sharing options for: Ask Plummets On Henry Rohkam House; Greening The Walls Of The Mag Mile; More 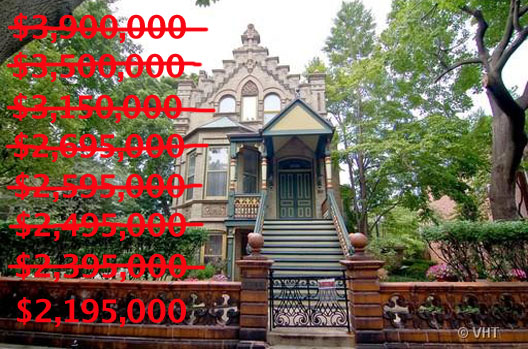 LAKEVIEW— One of the most singularly awesome old Victorians anywhere, the dazzling Henry Rohkam House has sustained $1.7M in price chops over a four-year listing span. It's gotten to the point where real estate pros are going to start wetting themselves over perceived market implications for the neighborhood. With such frequent and deep cuts, maybe prospective buyers are just dumbstruck watching every gruesome blow. Another couple years and you'll be able to trade up from your one-bed condo.

STREETERVILLE— The biggest green wall in North America may be coming to The Mag Mile's Hotel InterContinental. At a cost of $2M-$3M, the wall will, at least partially, remediate the highly offensive 26-story blank wall that greets Michigan Ave passerby. Come have a look-see.

HERMOSA— Walt Disney's birthplace sits fairly anonymously on the Northwest Side. Landmarking attempts in the '90s were beat back by sane reminders of Walt's adulthood anti-Semitism. So, as the property languishes on the market, it barely resembles the 19th-century home built by Walt's father. Interested? It'll set you back just $179K!

SOUTH LOOP— Our adventure in marketing this time around is developer McCaffery Interests' gimmicky lightshow design scheme for the long-struggling Roosevelt Collection. The Collection has done OK collecting residents, but can't seem to woo many retailers (it's been 75% empty for some time). Will a soothing continuous lightshow do the trick? Decide for yourself.