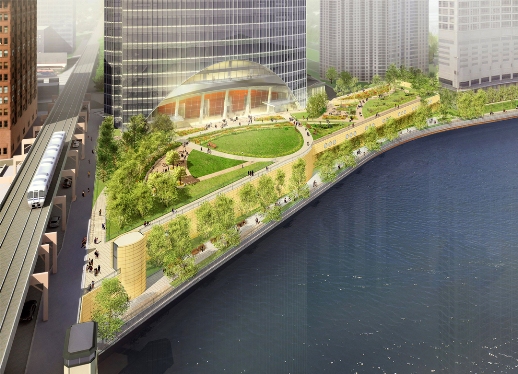 FULTON RIVER DISTRICT— This week, we dropped by a pivotal community meeting convened to take on the particulars of the River Point office tower development. With Rahm and co. kicking in $29M in TIF money, it's safe to say there's heightened scrutiny of the project. Not much was furthered in terms of design, but we know a bit more about the 1.5-acre public park that'll hug the river: it has just one access point, so, by design, it may succeed in warding off the public.

EVERYWHERE— We've expanded our public art map for the season. The handy sidekick is centered on the Brown Line's collection—by far the most boastful of the CTA trains—and the eclectic store of works that lives at Harold Washington Library. There aren't any Picassos or Calders, but the range and http://chicago.curbed.com/archives/2012/06/12/expanded-a-transitfriendly-tour-of-public-art.php are at least as stimulating as a Loop art stroll.

GOLD COAST— Having written about two available units at Andrew Rebori's art deco Fisher Studio Houses in recent months (one for $255K, one for $1.15M), we were still waiting for something more middle-of-the-road to come along. That's finally happened, in the form of a 1,400-square-foot duplex unit asking $499K. Come scope the singular decor!

GOLD COAST— We've got ourselves a case of the PriceUpper. A definite market irregularity, we're beginning to see more of it in the luxury segment. Take, for instance, this 1880s Sandstone townhome. It's actually been sustaining price chops for a couple years, but the owners made a recent tactical shift and began upping the ask. What was $1.599M in February is now $1.8M.