Chicago's Deep Dish History: And Then it Got Stuffed

Share All sharing options for: Chicago's Deep Dish History: And Then it Got Stuffed

Chicago is infamous for many things and deep dish pizza is toward the top of the list. Eater tapped resident pie expert Dan Zemans, who eats his way throughout Chicagoland reviewing pizzas for Slice, to break down the history of deep dish in a series of posts. Up now: Stuffed Pizza. 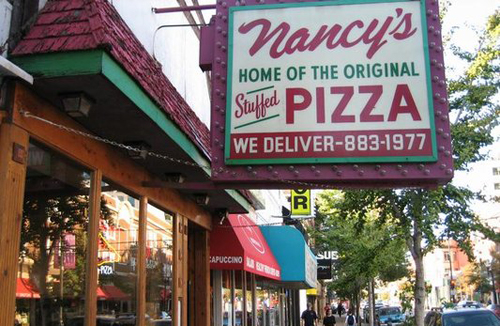 The success of Uno's didn't just open the door for other deep dish pizzerias, it made Chicago an open market for other innovators of thick, often gluttonous pizzas that the rest of the country might not have been ready for. Most prominent among those new pizzas are the stuffed pies that are often mistakenly lumped together with deep dish under the moniker "Chicago style pizza." While the two versions of pizza certainly look similar while sitting in their respective pans, other than their large size and shared characteristic of featuring tomato sauce on top of the cheese, they actually do not have much in common.

Deep dish pizza has an almost biscuit-like crust, often getting a boost of flavor from butter and/or corn oil (not corn meal; that's another myth). Stuffed pizza has a flakier crust that's almost always made with a bland oil like canola. Stuffed pizza also has a second, very thin layer of crust in between the cheese and the sauce (hence "stuffed") although thanks to the moisture above and below it, that part of the crust often goes unnoticed. Lastly, you will never see a deep dish pizza with close to as much cheese as you find in a stuffed pizza.

All that said, there is undoubtedly a connection between the styles. Deep dish had been around for more than three decades when both Nancy's and Giordano's opened their doors in 1974. The owners of both restaurants claimed to base their recipes on their families' Easter pies, known as scarciedda, that were made in Turin, Italy. Traditionally, there have been savory double-crusted pies in many parts of Italy, filled with cheese, meat and any number of other ingredients. But none of those versions have tomato sauce.

Little is known for certain, but common sense suggests that the creators of those two companies were as inspired by the success of deep dish pizza as there were any old family recipes. Sticking in the land of conjecture, it is certainly odd that there was no stuffed pizza before 1974 and then two companies started the same year with similar background stories. Could be coincidence, but that seems unlikely. Unfortunately, like the creation story behind deep dish pizza, this one remains a mystery.

What is better known is some of the corporate drama in the stuffed pizza world, none more shocking than Nancy's early history. Rocco Palese opened the first Nancy's in Harwood Heights, which was an instant hit and was even named the best pizza in Chicago a year later by Chicago magazine. In 1977, Palese sold that location to the Cirrincione family and then opened a new Nancy's on Central Avenue in Chicago, which he sold the Cirrinciones two years later, and then opened locations in Des Plaines and Lakeview. Over the next few years, disputes about territorial rights arose and the Cirrinciones attempted to put an end to it by first burning down the Des Plaines location, and, when that did not work, blowing it up and burning down the Lakeview location.

While not as shocking, the early history of Giordano's also has its share of drama. Founded by two brothers, Efren and Joseph Boglio, Giordano's almost instantly was responsible for the creation of two more longstanding stuffed pizzerias. Soon after opening their first location at 63rd and California, the Boglio brothers wanted to expand and brought two people into the business, Edward Jacobson and Dan Bacin. In both cases, before either of them actually opened a Giordano's, the relationships fell apart, and in 1978, Jacobson opened Edwardo's and Bacin opened Bacino's.