Chicago's Deep Dish History: It All Started With Uno's

Share All sharing options for: Chicago's Deep Dish History: It All Started With Uno's

Chicago is infamous for many things and deep dish pizza is toward the top of the list. Eater tapped resident pie expert Dan Zemans, who eats his way throughout Chicagoland reviewing pizzas for Slice, to break down the history of deep dish in a series of posts. Up first: The Beginning. 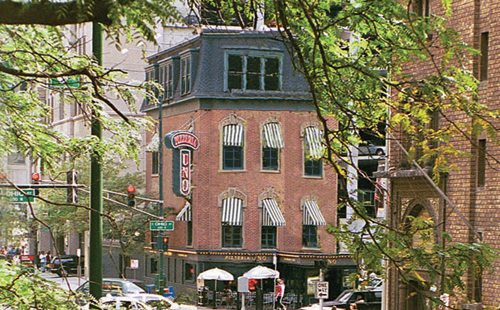 Deep dish pizza first appeared in a commercial setting when Ike Sewell and Ric Riccardo (born Richard Novaretti) opened the restaurant now known as Pizzeria Uno in 1943. Previously known as The Pizzeria and Pizzeria Riccardo, Uno’s got its name when Sewell and Riccardo opened Pizzeria Due a block away in 1955. Obviously, these men were not particularly creative when it came to naming restaurants, but they were much more impressive when it came to creating food. Well, actually, probably not.

Before the two went into the pizza business together, Sewell worked for Fleischmann's Distilling Corporation and Riccardo owned Riccardo's Restaurant and Gallery, a popular hot spot at 437 N. Rush Street from 1935 until 1995. According to corporate lore (which has changed a bit over the years), Sewell’s original plan was to open a Mexican restaurant.

Riccardo, a native of Italy, was willing to go along with the plan until he actually tried Mexican food for the first time. With that idea gone, the two settled on pizza but Sewell pushed for something much more substantial than the Neapolitan version and the two came up with deep dish pizza.

The problem with this story is that there is zero evidence to support the notion that two guys with no known cooking acumen came up with the recipe for deep dish pizza. In fact, there’s no record of anyone ever claiming to have seen either one of them even making a pizza.

So if not them, then who? Well, there are two better possibilities: Adolpho "Rudy" Malnati, Sr. and Alice May Redmond. Not only did both work at Uno’s but each of them unquestionably knew how to make deep dish pizza.

Gino’s East was not the first deep dish pizzeria to open after Uno’s, but of the big names in the deep dish world today, it’s the second oldest. Unlike the founders of Uno’s, Sam Levine and Fred Bartoli never tried to convince people that they knew the first thing about making pizza. But they did know how to hire the right people, specifically former Uno’s cook and possible inventor of deep dish pizza, Alice May Redmond, as well as her sister, Ruth Hadley.

That said, Levine and Bartoli did take creative license with part of their story. While they billed themselves as a couple of cab drivers who decided to try their hand in the pizza business, the fact is they were successful entrepreneurs who owned four taxi companies and were successful enough that they could afford property just off Michigan Avenue in downtown Chicago.

Rudy Malnati’s role in creating deep dish pizza may remain a mystery, but his legacy unquestionably lives on thanks to two of his sons following in his pizza footsteps. Lou, a product of his first marriage, founded his eponymous pizzeria in Lincolnwood in 1971. Today, Lou’s sons Marc and Rick run the ever-expanding empire that now has 34 outposts. Lou’s half-brother, Rudy Jr., got into the pizza game in 1991 when he opened the first Pizano’s downtown. Today, there are three additional Pizano’s and, while it’s the youngest and smallest of the deep dish companies profiled in this article, there’s a strong case to be made that it’s the best.

Tomorrow: we dig in to stuffed pizza and explain, that despite general ideas, it is in fact different from deep dish.