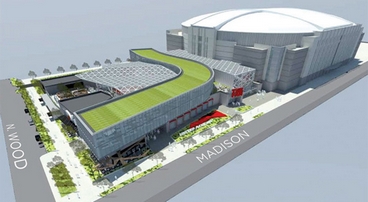 NEAR WEST SIDE— The local sporting aristocracy, led by Jerry Reinsdorf and Rocky Wirtz, is getting serious about bringing commercial development to the area immediately surrounding the United Center. In discussion in some form for more than a decade, they've ratcheted up the politicking and have also just released a rendering for a retail complex at Madison & Wood. Come take a look.

HAMLIN PARK— The Lathrop Homes, part of the nation's original wave of New Deal-built public housing, has just landed a modicum of protection—symbolic at least—in the form of acceptance to the National Registry of History Places. This could change the way the CHA approaches redevelopment.

WILMETTE— A major local news item in the past several weeks, it now looks as if the John Van Bergen and Rudolph Schindler-deigned abodes on Isabella Street in Wilmette will be preserved by way of sale. At least that's the likely outcome. The immediate threat dissipated when the current owner/developer was granted permission to split the property, bundle the structures on one parcel, and build new on the other.

FULTON RIVER DISTRICT— 444 W Lake has been resurrected. New renderings found on the website of developer Hines Interests have sparked chatter across the community of web-based development stalkers. Designed by Pickard Chilton, the office tower, in its latest conception, will stand 650 feet tall with 45 stories.