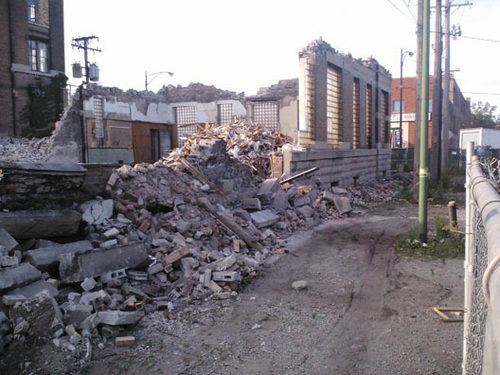 AVONDALE— The Brand Brewing complex was caught in a state of partial demolition by one of our readers the other day. From what we've heard, no permits have been issued for the suspected and feared HHgregg big box store that was to gobble up the site at 2530 N Elston. But developers have made the contentious move to raze the classic industrial structures anyway. Preservationists don't win many of these battles, but we expected a more drawn-out affair at minimum.

STREETERVILLE— Oprah has better things to do than worry about renting a co-op she's never had a use for. For that matter, breaking even on it isn't even a priority. Not when she's listed the luxe lakefront spot for half of what she paid for it in 2006. The 4,600-square-foot unit is now asking $2.8M.

KENILWORTH— A memorable supporting cast member in the eternal John Hughes comedy Planes, Trains & Automobiles, the North Shore colonial house that posed as Steve Martin's family home is on the market for $1.799M. It's strikingly similar to the Home Alone house just a mile or two away. Come sneak a peek, it's sure to take you back.

HYDE PARK— A pre-fire Italianate is newly listed for $1.495M in Hyde Park. One of the nabe's elder statesmen, the sublime 1865 structure has graced the cover of Hyde Park Homes. Bonus: it's in perfect condition.