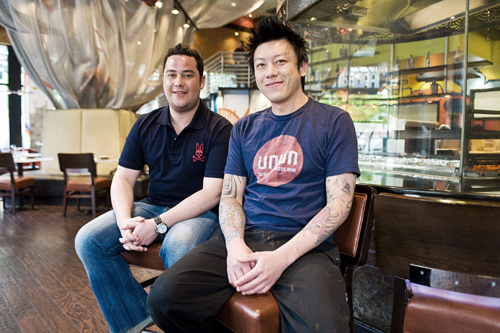 First time restaurant owners, Mike Schatzman and chef Worachai Thapthimkuna, aka Chef Chao, made sure the city knew they were coming, long before even opening Union Sushi + Barbeque Bar. The pair had traveled extensively throughout Asia and chronicled their adventures on their blog, Mike & Chao Chow. They embraced social media so well that when the restaurant opened, they already had a loyal following eager to check out their graffiti-splashed, industrial-vibed River North Japanese eatery. The first year, which was just celebrated with a big party May 20, has gone well for the pair. But if you think they're planning to open another spot soon, think again. They're quite happy with what's happening now.

You just threw an anniversary party at the restaurant. How was it?
It went very well. We did a special dinner with Zagat where we made some of our best-selling items and did future interpretations on some of them. We had 80-plus people who came. We had a full restaurant and sold every seat that was available.

Can you believe a year has already gone by?
No, [laughs]. It feels good. The first year is always the toughest year and time goes by slow, each day is extremely long though. We're doing really well as expected and maybe better. We have a strong customer base we're going to keep building on.

You did a number of anniversary specials to celebrate last week – will you keep that going?
The Tuesday night [special] was so busy when we did the sparkling bottles of sake so we think we're going to do Sparkling Sake Tuesdays. The idea of the specials was to showcase what's been selling well. We'll do a few more specials here and there.

Are there a lot of sparkling sakes?
In japan there's a ton of different varieties, but here in the U.S. there are only four to five and in Chicago we have two of them.

So why did you and Chao want to open Union Sushi?
The idea was really Chao's talent with cooking Japanese cuisine and taking a different take on it. We saw a big opportunity in Chicago to do high quality Japanese food at a reasonable price point. When we looked at the landscape here there were a lot of high-end restaurants and more authentic restaurants. We saw an opportunity in the middle. People like to eat Japanese food a few times a week in an ambiance that's a little more casual where they didn't have to dress up. We wanted to create that fun energetic place where we're serious about food, but in an environment they're having fun as well. The biggest thing for us was combining all the [Japanese food] elements under one roof. It gives people options, but from one type of cuisine.

Why this location?
We wanted River North because there's a lot of density. We felt we could be a casual go-to neighborhood restaurant and this neighborhood needed that. There was an opportunity to have a high-quality neighborhood restaurant and with what's going on over here with the businesses, high rises, nightlife and hotels, it makes for a great area. We looked around and our biggest thing was being patient. We got a little impatient and if we chose [other spaces] that could've been a big problem. We were able to use a lot of imagination with this space and do a good build out. You can't go wrong with a corner; there's a lot of great visibility.

So how has the first year been?
Believe it or not, it's gone as expected. There's always a couple of bumps in the road. We've met, if not exceeded, our expectations and we have very high expectations. To meet them is a great feat. We had a big social media campaign we kicked off. I was an unknown restaurateur and Chao was relatively unknown at the time. We had a lot of travel planned for research. [Social media] worked so well when we opened our doors, we were really busy. Once we worked though the kinks, we [now have] an incredible place with a great staff. We're ready to keep moving forward. Because we were so effective with social media, we were overwhelmed at first.

How was the actual opening? were there any memorable screw ups or did things go smoothly?
Consistency was hard. We had a lot of different chefs that had never worked together. People weren't necessarily thriving and our service wasn't up to the standard we wanted it to be. Our product wasn't being showcased in the way we knew it should and could be. We worked on that. There were never any real catastrophes.

Other than the professional side, how has it been emotionally having a hip neighborhood spot?
Some days can stress you out where you're getting attacked left and right and you're fighting problems. Other days are great. When you can get through the tough days it makes the good days even better. There were definitely a lot of sleepless nights and days that would go on forever. We have great relationships now with our customers. They come in and now they know us. They were dating us at first to see if they wanted to have a relationship with us. Now we have 70 to 80 percent regulars coming back. We have a lot of great loyal customers. The most gratifying thing is that groups of people come in from out of town and will come back the next night.

What's been the best part of having Union Sushi?
We're in the hospitality business so providing good food and service. We make people happy and knowing you can fulfill a person's type of experience they're looking for. We've gotten to know a lot of great people.

And the worst?
Working on the weekends. Sometimes you want a break. Coming from corporate America you're used to that, but sometimes when you work seven days in a row, and I haven't had a vacation in over a year, it can wear on you. At the end of the day we love what we do. Sometimes you want to be in the customer's shoes at another restaurant. The toughest part sometimes is the long hours, but times flies.

What big lessons did you learn in the first year about running a restaurant?
Patience is very important. When you're in a restaurant and have to fill a void you can act too fast. You have to wait for people to come when it's a right fit and not rushing to make decisions. And another is that staff is so important—having a great staff that gets excited about your product. It's a small company/family so having people come and enjoy themselves is important.

You've had eating contests and other things. What new fun things do you have planned?
We're always working. We like to do things differently. I'm not scared to try things. We tried a New Year's party where we were going to do a special menu and changed it around at the last minute. We're always looking for new ideas: sake tastings, fun events, duck wing eating contests. My mind is always thinking. When we come up with a new idea, we try it. It's about doing things that are fun and different. We invest a lot in social media and we are able to get a lot of people to attend these events. We have iPad menus and we're doing wine, sake and pairing recommendations. We're trying to use technology as our friend to work with our servers to show how people can have different experiences.

What's next for Union? Any expansion plans?
Everyone always asks when the next thing is opening and I say it's only been a year. We have to wait until it feels right; we're still young and have a lot of room to grow with what we're doing here. We do a party catering business. We're focused on doing what we do and doing it better. We're doing a line of milkshakes this summer with different flavors that we'll change up every few weeks. Down the road, however, who knows what will happen or where we'll go.