Did Kellogg's Try to Dupe With Recipe by Grant Actatz?!

Share All sharing options for: Did Kellogg's Try to Dupe With Recipe by Grant Actatz?!

Now we know that restaurants have ripped off Grant Achatz's and Alinea's food and tried to pass it off as their own. But now it looks like corporations are getting into the game, too. Kellogg's, at Snackpicks.com, posted a recipe for sweet potato toppers. But what makes it interesting is that they posted it by chef Grant Actatz.

If you do a google search on Grant Actatz, no one comes up but plenty of links to Achatz pop up. Alinea co-owner Nick Kokonas told Eater that he contacted the company to see where they got the recipe and how they decided to use Achatz's name. He added they hadn't given authorization or received payment for the use. It was also the first Achatz had heard of it. "That certainly is not our food and it's amazing to me that Kellogg's would put that on there without contracting with us first," Kokonas said.

Doing a quick Google search, Kokonas found a recipe as part of an article in the Shelton-Mason County Journal from 2006 that lists the recipe by Achatz. He said he's verifying whether an interview was ever done with this small-town paper, but said, there's "no way would we endorse that on Keebler's site either way. [It] just seems fishy."
· Was Alinea Ripped Off? Grant Achatz Thinks So [~EChi~]
· Chef Grant Actatz's Sweet Potato Toppers [Snackpicks]

UPDATE: It looks like Kellogg's removed the page, because now when you try to access chef Actatz's sweet potato topper recipe, it brings up a "page not found." Eater got in touch with Kellogg's media relations office and the person we spoke with, who asked that her name not be used since she is not a company spokesman, did say that they're "actually looking into [the situation] right now. We need to confirm the details of it." When asked where and how they got the recipe, she said they have a recipe database, but that they don't have an official response at the moment. They're also working on getting in touch with Achatz to confirm details. 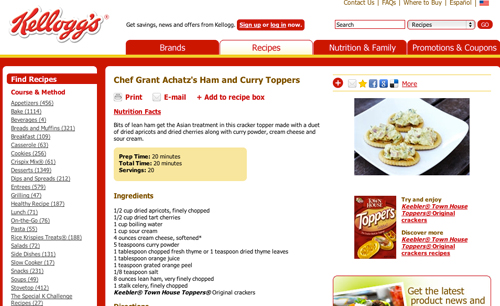 Parachute, One of Chicago’s Most Acclaimed Restaurants, to Reopen This Month After Two Years