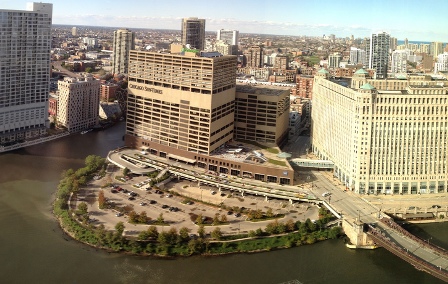 RIVER NORTH— Wolf Point finally has serious development prospects, and, bucking the trend, they're expanding in scale and scope. What had been a three-tower proposal with the tallest at 60 stories is now a three-tower proposal with 80, 60, and 50-story towers. Such a brazen move is certain to attract NIMBY pushback. We're hoping to see some renders come the end of the month community meeting.

THE LOOP— Last weekend, Curbed wormed its way into a dignified function commemorating the completion of Roosevelt University's Vertical Campus at Wabash and Congress. The 32-story multi-purpose academic tower is the second tallest of its kind in the nation and sixth in world. Far more impressive taken from the street, the upper floor dorms do boast some incredible views.

EVERYWHERE— Just for giggles, we decided to check out the five most expensive MLS-listed rental properties. Not surprisingly, a Trump Tower condo tops the list at $22K/month. Come check the rest.

GOLD COAST— A magnificent rowhouse designed by John Root has been languishing on the market for the better part of two years. We don't know what to do for it other than give it some props. Other suggestions: fix the wonky and misplaced interiors and lower the price. The place has beautiful bones. Come see for yourself.