Behind the Scenes with a Local Pizza Delivery Guy

Share All sharing options for: Behind the Scenes with a Local Pizza Delivery Guy

As Pizza Week comes toward an end, Eater thought it would be fun to talk to a local pizza delivery guy to see what, if any, crazy stories he had. Below, our anonymous pizza guy tells some salacious tales, in his own words. 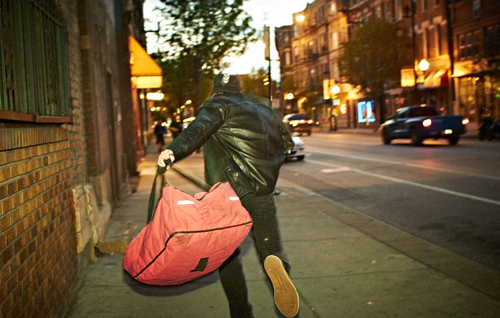 I work as a delivery driver for an upscale pizza restaurant in Chicago. Often referred to as 'the Pizza Guy,' I find myself driving through the crazy streets of Chicago, running down dark alleys on a mission to deliver 'the goods' to the ones craving a deep dish fix.

Avoiding a collision with a wild cab driver, I barely make the yellow light and peel up to a fancy hotel. The valet guys sometimes scoff at my chattering vehicle but not this time. I give a respectful nod and make my way in. I hustle past the doorman and the front desk calls up to the room. The elevator shoots me up 40 or so stories towards the sky. As I walk down the hallway, I admire the fine paintings that line the walls.

After a couple knocks at the door, it opens and there are a half dozen guys with slick haircuts and confident attitudes. Its quite a large suite and as I'm crouching down to lift the pizzas out of the bag I ask what they're doing here in Chicago.

"We're shooting an adult film," one of them says.

There is a moment of awkward silence as I set the pizzas on a table. When I turn around I sense its legit. With a better view of the rest of the suite I see two big-busted women perched on a red leather couch.

"Wow, thats cool," I say. "You know I'm an actor here in town as well. If you need an extra pizza delivery guy, I've got the bag and the uniform."

They all have a good laugh and I feel the room relax. One of the gentleman writes a $25 dollar tip on the receipt and I smile and thank him. And I chuckle to myself as I walk out of the hotel because I swear I saw it cross their minds.

The whole scene takes me back to a similar encounter on the job. I remember bringing pizzas to a company party just off Chicago Avenue. I walked into the building and could tell immediately that this was no ordinary office.

It was a beautifully lofted unit with open stairs leading to another level. The space had a chic, kind of retro feel with bright orange colored sofas and music playing from everywhere. It was loud and fun and kind of loosened me up a little. Then I realized there were a number of speakers embedded into the surrounding walls around me. It was like a funhouse.

A short blonde middle aged woman made her way down one of the staircases and smiled. "Hey, its the pizza guy," she said looking a little flustered about putting together the pizza party. We said our hellos, then, as she began to examine the receipt, I asked what kind of work they did. I wanted to know because it looked like a very cool place. "Oh, we custom design sound systems for your home," she explained as she filled out my tip and the total.

"That's awesome!" I said and continued to admire the music and all the speakers, so many sizes and colors and styles. I imagined how loud it all could get. I had to know, so when she handed back the signed receipt I asked her, "Wanna pound it really quick before I leave?"

Suddenly a look of shock swept across her face. She was frozen, uncertain what to say or do. It was a combination of fear, embarrassment and contemplation. Then it hit me. I realized that what I had asked her was taken out of context. She didn't understand the lingo. We both were clearly afraid of what would happen next.

"I was talking about the music," I said almost defensively at the last hanging second.

"Oh," she said and we were both relieved.

"Thats ok," I said and turned quickly away making my way the hell out of there. "Have a nice night," I said over my shoulder.

"Yes, you too," she said. I stole a fast glance to see her gaze toward the floor. Slightly catatonic, as she was still processing what she thought had just happened. Out of the building, I felt dirty for a minute. Like we had both done something wrong. I shook it off and went back to the restaurant to share my story with the other Pizza Guys, who all had stories of their own.