Chicago is (in)famous for many things and deep dish pizza is toward the top of the list. Eater tapped resident pie expert Dan Zemans, who eats his way throughout Chicagoland reviewing pizzas for Slice, to break down the history of deep dish in a series of posts. Up now: Burt Katz. 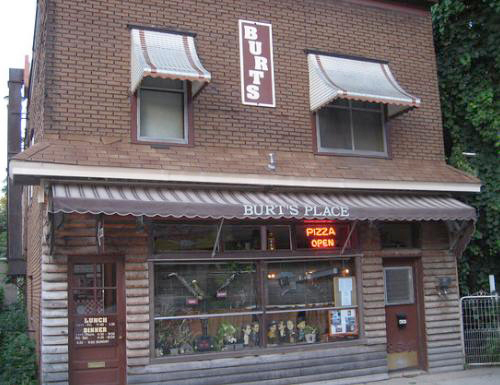 Standing alone in more ways than one in the world of thick Chicago pizza is a local legend with a long white beard in Morton Grove. Burt Katz had been in the pizza business for a couple of years when he opened Gulliver’s at the northern edge of the city in 1965. He was there for six years before selling his stake and opening Pequod’s in Morton Grove. After 15 years there, he sold the restaurant and purportedly planned on leaving pizza behind. That lasted all of three years, and in 1989, he opened Burt's Place, which today gets about as much national acclaim as any Chicago pizzeria.

Katz’s signature contribution to Chicago pizza is the caramelized crust that still draws raves from fans of Pequod’s and Burt’s. But where the iconoclastic Katz really stands out from the crowd is in his crust.

While plenty of deep dish pizzas feature well-liked crusts, the bread base of a pizza at Burt’s, which is more like a top-notch focaccia than a traditional deep dish crust, is one of the better pieces of bread in Chicagoland. Burt’s pies also differ from the world of deep dish in his much more restrained use of sauce, cheese and toppings.

In the last few years, Burt’s has gotten substantial national attention, most prominently on the cover of Saveur and from Anthony Bourdain’s Chicago episode of No Reservations. But anyone who goes there expecting traditional deep dish pizza (or goes to an actual deep dish pizzeria expecting to get something particularly similar) is going to be disappointed. Whatever you think of Burt's pizzas, there's no denying his impact on the Chicago pizza scene. Let's hope he's not planning on leaving it again anytime soon.