Getting to Know the Hopleaf Through its Regulars

Share All sharing options for: Getting to Know the Hopleaf Through its Regulars

Welcome to The Regulars, a new feature written by Patrick Sisson that tells the story of Chicago’s iconic bars from the point of view of those who know it best; owners, staff and regulars. First up; the Hopleaf. 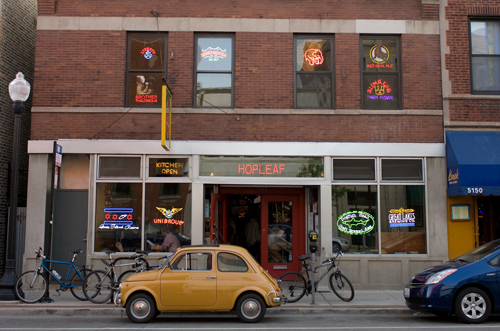 For many Chicagoans, their love affair with Belgian beer was first consummated at the Hopleaf, the Andersonville beer mecca started by husband-and-wife owners Michael Roper and Louise Molnar. Named after a brew from Malta, the origin of those red hopleaf signs decorating the bar, this Far North Side venue has introduced drinkers to microbrews, rare imports and, somewhat more recently, Belgian-inspired food, for two decades. Frequently praised as one of the country’s foremost beer bars, the Hopleaf is close to revealing an expansion, which will bring total indoor seating to about 275.

But at the beginning, things were a bit more modest. Roper moved to Chicago in 1982 from Detroit after his previous bar, the New Miami, was firebombed. He worked a variety of jobs and bar shifts, always looking for the chance to run a bar again. It came in 1991 when Clark-Foster Liquors (also known as Hans') became available. Located on the eponymous corner of the Swedish neighborhood, the bar was previously owned by Hans Gottling, a neighborhood fixture who supposedly introduced the area to glogg. It was a fixer-upper; a lot of work happened before the first iteration of the Hopleaf opened in November 1992. Here to tell the story are Roper and some key players from over the years.

Michael Roper, Hopleaf owner: “When we bought the bar, the customer base was old Swedish guys. It was on its last legs and the customers were aging out, dying of lung cancer and cirrhosis.”

Meaghan Fiore, bartender: “Early on, this was an old man bar. This was like crotchety ol’ men with cauliflower noses, cirrhosis of the liver spots. The prostitute who was on the corner used to come in – we sold Huber in the early days, a Wisconsin beer, for $1 – she’d come in and order “A Hubie Scubie.” 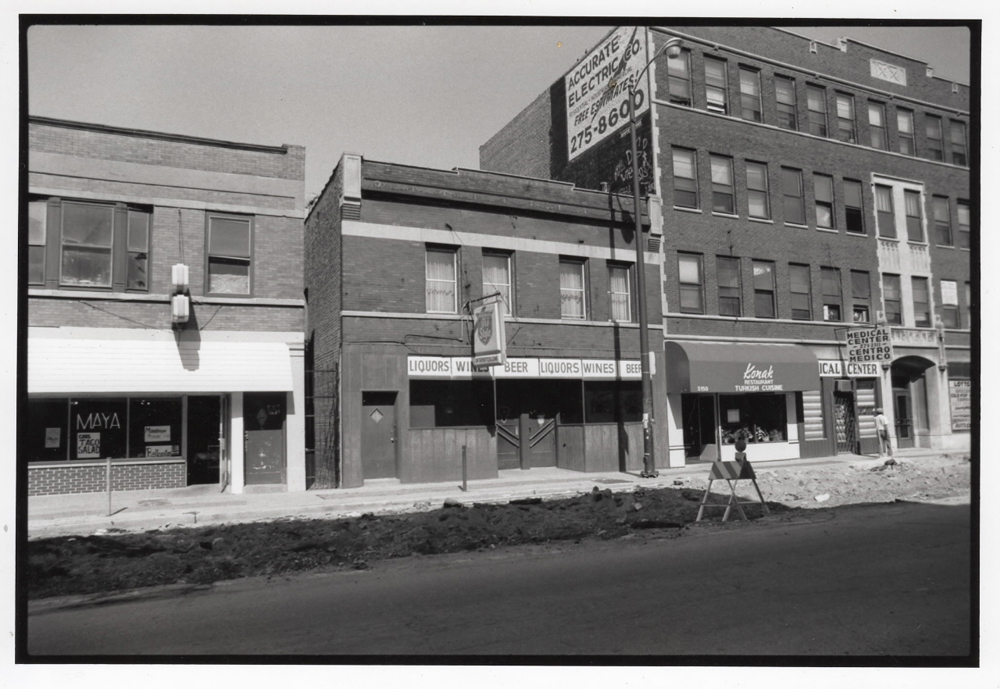 [Photo: Clark-Foster Liquors before it became the Hopleaf, by Louise Molnar]

Meaghan Fiore: “I think he gave me the job right away. As far as he was concerned, when I was here, I was in charge and he would back me up 100 percent, no matter what. That’s huge to have an owner give you that kind of trust.”

Michael Roper: “I started dismantling the old bar almost immediately. Credit cards, my own labor, and some handy friends who lent their building trades talents to the project made it happen. It was some real serious stuff; I needed to put a real women’s bathroom in since there wasn’t one. The crowd that was coming here didn’t really care about the construction dust; they thought it was interesting. Banks were not believers in the future of Hopleaf. I paid off the credit cards very quickly.” 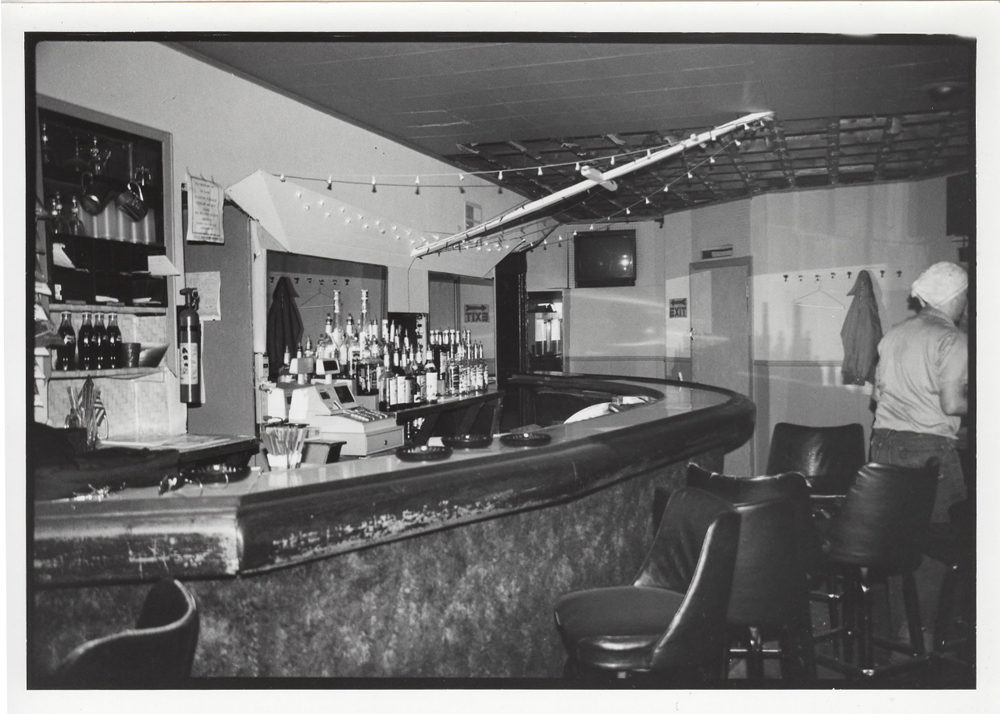 Meaghan Fiore: “They didn’t have a lot of staff to start. We had one bartender at the bar by themselves in a 60-seat room. You did everything; emptied the ash trays, closed, locked up, cleared the dishes.”

Bill Savage, Northwestern English professor and regular: “A woman I was chasing after said we should go to this bar that has a bunch of Belgian stuff on tap. Whatever, I was trying to get laid. She was coming in here and I came in after. We sat at the bar when there was only one set of eight tap handles. I was blown away by how good the beer selection was. The thing with that woman didn’t work out; fine, most of those things don’t. But I kept coming back, because of the sense that this was an interesting place with interesting people.”

Brian Azzarello, graphic novel author and regular: “There weren’t a lot of women coming into this bar. A girl would come in, and people would be like, ‘what is one of those?’ That was the beer culture back then.”

Michael Roper: “The first list had 35 beers. I have 350 now. No one else up here had that many beers, or the ones I was selling. Twenty years ago, there was Chimay and Westmalle. The first draft Belgian beer we had was Grimbergen, which we only had because the distributor was in Wheaton.”

Brian Azzarello: “The beer was good, almost from day one. At that point, usually the most outlandish beer you could get was Sierra Nevada. The bar didn’t fit at first. What they were selling, not a lot of people were buying at that point.”

John Hall, Goose Island president: “It stood out like a bright star. I had been to Belgium, and back at that time, we were not anything remotely like Belgium, and he was a little bit. He was way ahead of his time.”

Meaghan Fiore: “The Hopleaf coincided with the emergence of these small craft breweries. Coupled with the Belgian influence, it was the perfect storm. It really was very gradual.”

Bill Savage: “If you read the old reviews, they got a lot of bad rap for rude bartenders. As a rude bartender myself, it all comes down to this: rude customers generate rude bartenders. But as the place became busy, when you wanted to make small talk when they needed to serve eight people beer, you’d get cut off. Bartenders should not be corporate robots. I don’t get my ass kissed and I’ve been here for 20 years.”

Meaghan Fiore: “It’s a dance back there. It’s a tag team, a marathon, all those analogies rolled into one. I guess it’s similar to pre-Prohibition and post-Prohibition times, when bartenders were friends and colleagues in the trenches, keeping the public happy and wet. I can go on and on with the hijinks we’ve pulled over the years.”

Brian Azzarello: “When Michael said he wanted to do a restaurant, I said he was out of his fucking mind, you’re going to wreck this place. Look at your product there, you know what, none of it expires, there’s no waste; last time I checked, 14-year-old Scotch doesn’t have any expiration.”

Michael Roper: “We use 1941 chrome NCR cash registers. We use hand written tickets; hardly anybody does that. It’s super old school. It’s because I’m old school. We’re going to be forced to join the 20th century when we expand.”

Brian Azzarello: “The devastating moment was when it was on Check Please (in 2004) after the restaurant opened. Oh my god, walking in here on Friday, I was always able to come here at 5, do the crossword puzzle. After Check Please, it was wall to wall on a Friday afternoon.”

Michael Roper: “We sell 1000 pounds of mussels a week. We get delivery every day and we get a lot of attention from our fish purveyors; that’s a lot of mussels.”

Michael Roper: “One time Ivo Bosteels (Tripel Karmeliet brewery) came in here with his wife and son, unannounced. He ordered mussels for two, the big bucket. He ate them all himself. Then he ordered another bucket, and ate them all himself. Then he ordered a third bucket, ate it himself. I mean, that’s like five pounds of mussels, and he drank the broth, ate the baguette. He said his wife makes him mussels, and they’re not as good. And his wife was right there! He asked what was in the broth. I told him Belgian white ale, bay leaves, thyme, shallots, and butter. And his wife said, I don’t use the butter, I worry about his heart.”

Bill Savage: “When Michael started this place, Belgian meant a joke on Monty Python. Now people are opening bars like that is a category of saloon. I don’t know anyone who works harder than he does to understand the industry. You can be preserved in amber and never die, or you can change with the times; Michael still changes and grows.”

Michael Roper: “In the old days, I would automatically get every weird, rare beer. Now I have to fight for them, since there are 20 to 30 bars in Chicago trying to get those rare beers. Now, some of the stuff doesn’t even get past New York.”

Meaghan Fiore: “There are no TVs, no games, none of the typical distractions you find in almost every bar in the country. People come for quality beer, excellent service and conversation. It’s a place you’d come with friends, or a place you’d come to meet new people. The best thing about the Hopleaf since the beginning is that we’ve welcomed all comers.” 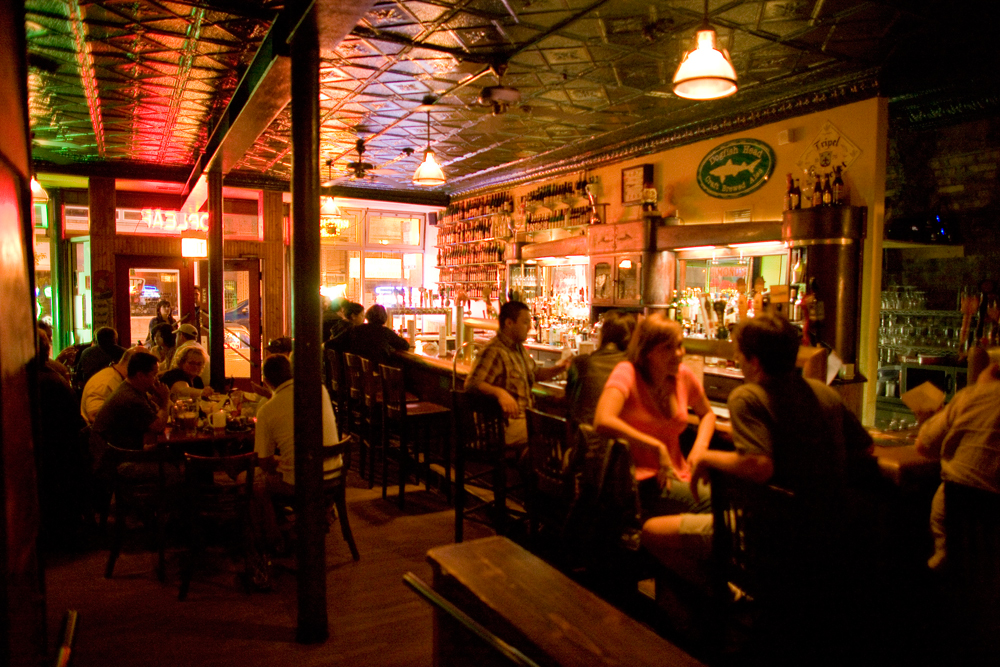 Bill Savage: “A place like this is a community center. It’s not the ‘Cheers’-type bullshit where everyone knows your name. I was here for a few years before the bartenders gave me the time of day, that I wasn’t some random strange guy. You need to come in here and prove your bonafides.”

Meaghan Fiore: “One year, when April Fools was on a Sunday, we stayed on Saturday night and took all the signs down and put up ‘Welcome race fan’ signs and replaced the neons with Bud, Miller Lite and Coors. One of the bartenders printed up a specials list, ‘Ladies night at the Hopleaf’ type stuff. Michael drove up and noticed that something was off with the neon. I think he kept it up for the whole day.”

Michael Roper: “We’re adding a big addition right now with another 100 seats that’ll remove the old kitchen and put in a much bigger one. It may just get busier, but my hope is, that someone could come in here anytime, any night, and find a stool, be engaged in the situation and have a good time on a Saturday night.”

Meaghan Fiore: “I’m not going to lie. It’s hard. I think human beings pine for the olden days no matter what, even if they’re horrible, and even in their mind it’s only a good memory. I think the buzz from the expansion will create a lot of business. People who are disappointed that it’s so hard to get a seat here Friday night won’t say that again. But, having a two hour wait is the best thing that can happen to your business. Nobody wants to sit in an empty bar. Change is hard. But it’s been a great ride.”

Bill Savage: “The neighborhood loves and resents the bar. Some people say, 'Who the fuck do they think they are?' and there are people that think, 'Thank god they started up.' When he opened 20 years ago, there weren’t a lot of upscale joints in the neighborhood.”

Meaghan Fiore: “I think the best seats are probably those two bar stools at the western end of the bar. You can see the whole room, you can see people coming and going, you can see down the back bar and get a behind-the-scenes view of the dance going on back there.”

John Hall: “He is kind of the model publican, if you will characterize it as that. He cares about the community, he always has. He develops long lasting friends based upon what he does. He brings more and more people into the good beer category every year.”

Michael Roper: “There are people that rely on us for their social life, for something beyond food and drink, who like the camaraderie. The people who come here as regulars, they don’t really come because of the good beer selection or what we have to eat. There are interesting people to talk to.”

· That Hopleaf Expansion? It's Getting Pretty Close [~EChi~]