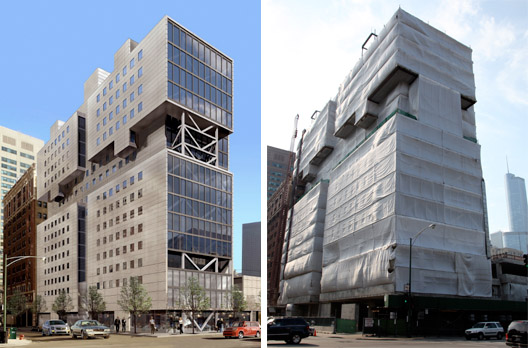 An old Valerio Dewalt Train rendering, and the present state

RIVER NORTH— At long last, work is set to resume on the stalled and mummified Staybridge Suites project at Huron & LaSalle. The resurrected luxury hotel plan will have a new developer and brand, but hopefully will retain the architectural services of Valerio Dewalt Train, who fashioned a genuinely pleasing design all those years ago.

ROSCOE VILLAGE— On the edge of Roscoe along the North Branch sits raggedy but serene Clark Park. Destined to receive a new boathouse, invested members of the community are crying foul over the planning process and cost. They want something small and modest while the Mayor wants a bloated showcase. This forms the crux of our "neighbor beefs" feature. Check it out!

GOLD COAST— A Playboy Mansion condo hit the market this week. It's not the stunner that we've written about in the past, but a more modest number that tries to compensate with marble and animal hide. The bunnies may have scurried to L.A., but here's your chance to keep the memories close at hand. The ask? $2.3M.

THE LOOP— The old Waterview Tower site at Clark & Wacker got another re-rendering. The design from November by now-defunct DeStefano Partners had some gravity defying cantilevering going on. Whether that proved impractical or whether the architect's departure is to blame, the new design is more smooth, uniform, and conventional. Drop on by for a look-see!