Share All sharing options for: Looking Back Over Rustic House's First Year 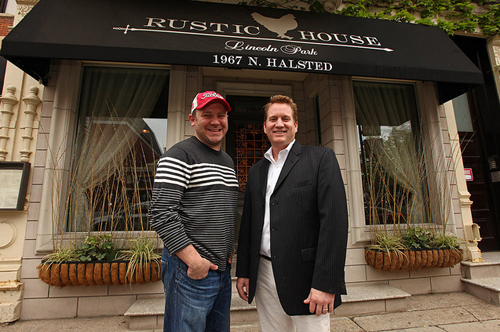 Following the success of their three-starred Gemini Bistro, business partners chef Jason Paskewitz and Ryan O'Donnell took a gamble and decided to open Rustic House, about a mile away. What got them most excited was the rotisserie left behind by Trattoria del Merlo, which occupied the space before Rustic House. This gave Paskewitz the chance to build a more refined menu around the various locally sourced meats he cooked up in it. Coming up on their first anniversary, Eater chatted with O'Donnell, who talked about wanting to grow their business while staying committed to their loyal customers, getting another three stars and what not to do when installing kitchen equipment.

Since you already had success with Gemini Bistro a few blocks away, why did you and Jason want to open Rustic House so close?
Gemini Bistro is a neighborhood bistro and we had a big following within Lincoln Park. We had a lot of repeat guests. We felt we could tap into our loyal customers that we already had at Gemini and as long as we did a somewhat different concept, with Jason's food as good as it is, we'd have success there. The failed restaurant of Trattoria del Merlo gave us a good deal with equipment there. We were able to get in there and got a good deal on the space. There wasn't a big build-out cost. What attracted us the most was the rotisserie, which was already there. The building's owner, Don Wilson, had imported it from France a few years back. His wife had tried doing a lounge/bakery concept. We fell in love with the rotisserie and developed the concept around that.

Talk about that menu concept.
Everything we put on the rotisserie is meat—poultry, pork rack, chicken, lamb chops—we have a different special every day. But not everyone wants meat every time they go out. Jason prepares fish really well. We have seafood appetizers and entrees and a grilled octopus; we have a wood-burning grill in the kitchen to give it that rustic feel of open flames and simply prepared dishes.

So how has the first year been?
It's been really good. We were really fortunate to get into Chicago magazine's top 20, which has helped out lately. The first year ... we've had the same staff since we opened. Our GM, Brianne Carden, she's been essential to our operation. Jason and I are very hands on when it comes to not only cooking, but also managing our staff front of house and back of house. Brianne has really stepped up and kept service up and developed a great relationship with our clientele at Gemini and it's been nice she's been able to give Rustic House the same neighborhood feel that we have a Gemini even though the price point is a little higher. People may not visit once a week, but they still think about us and people expect the same thing with product and service. Our sous chef, Miguel Ortiz, has done a great job with the food when Jason can't be there.

Does it feel like it's been a year?
It doesn't. It's flown by. It feels like we opened a couple of months ago. I think a large part is because of Brianne and Miguel being real solid to give Jason and I the time we need to oversee both places and not stress out and worry about things, like food costs or service standards or anything that goes on with the restaurant that we deal with. A lot of credit goes to them for sure.

How does it feel to have two 3-star restaurants that are also both Michelin Bib Gourmand spots?
It feels great. We're very proud of both places and flattered at the same time. We're humbled and flattered and proud. And excited of course, too. We feel we've earned it, but we're not cocky or over-confident about it. It's nice to be recognized and a lot of work has gone into it. It's been a team effort between Jason and myself to juggle the two restaurants.

How did it feel to be named to Chicago magazine's Top 20 best new restaurants?
We were named to it with Gemini when we first opened as well so we were hoping we'd get the top 20. [No.]15 is nice and I guess they ranked it in order this year. We felt we could've been a little higher, but we were extremely excited to have made the top 20. It was something we strive for because we feel we're on the same level as all the big boys in town even though we have two small neighborhood spots. We're not fine dining or doing overly complicated cooking techniques or tasting menus, but we put a lot of pride and passion into our food, service and overall atmosphere. We weren't expecting to be in the top 20, but would've been extremely disappointed if we weren't in the top 20.

How was the actual opening? Were there any memorable screw-ups or did things go smoothly?
Yeah, actually there was a good story. During friends and family dinner, the Ansul system (the fire extinguisher system over the line that puts out fires) went off. Our hood is 12-feet long and our equipment jutted out to about 13 feet. We didn't realize that one foot of equipment outside the hood was directly under the Ansul system, the tank that holds this white powdery liquid spray that comes out. The equipment was under the tank and our first night of friends and family, the dining room was full of about 80 people and about an hour into service, the Ansul system went off. It nailed all the cooks and Jason was on the line. They were all covered in this white powder. All the food was ruined of course. Very luckily we had just put new chickens and ducks on the rotisserie, but everything else we were serving was ruined. We were able to kind of shut it down for about a half hour, let everyone know up front what was going on. We were honest with them that we had a fire mishap in the kitchen. We said they'd get their food, but they'd only now get chicken or duck. We had to retake orders. Thank god the rotisserie was out front because that saved the day. We were able to feed everyone. The rest of the night ended up going well. Good thing it happened during our practice run.

What's been the best part of having Rustic House?
The ability to stay busy and to stay creative. The last thing Jason and I want to do is get stagnant. As much as we love Gemini we want to grow and we want to do more things. The fact we were able to do that with a new restaurant a mile away and still be successful with it gave us the confidence that we were looking for that, "Wow, we do make a good team and can be creative together." That's important in this industry because otherwise you can get into a rut.

And the worst?
We don't get to spend as much time—but it's more me since I'm in the front of house—that I don't get to see the guests as often, that connection with our regulars. It limits the ability of Jason to ... he shows his talents on the menu, but it limits him to do brand new specials every night because he has to be at one or the other place. It's not really a bad thing. It just limits our acknowledgement to our guests, like in the way I can greet people. But there really isn't a bad thing.

What's next for you guys, any expansion plans?
Definitely, we're always keeping our ears open. We have some other things in the works. We have had some things in the past that looked promising, so...