[Photo: Andrew Brochu's frog legs and crawfish, before and after]

Andrew Brochu has worked with some amazing chefs, including Grant Achatz at Alinea and David Carrier at Kith & Kin. But now that he has been tapped to head up the kitchen at Graham Elliot's namesake River North spot, the game has changed. Brochu, long heralded as one of Chicago's most talented yet somewhat-under-the-radar chefs, now has a chance to truly shine. He has just released a new spring menu, and has sketched out three dishes here to showcase his skills. Why does he sketch? It's pretty simple: "Just to get an idea of where things will go on the plate."

Andrew Brochu, chef: When I'm doing a new dish, I pick a component that I want to be a shining component, whether that's a protein or a vegetable. I don't [sketch] for every dish, but the ones that are heavy-component driven, where there's 10 or 15, I have to have an idea of where the shapes will go on the plate and still have symmetry and there's always an outline of what's going on. And to see if that outline is going to work. For the most part, I've been doing this long enough that I have a style of plating that is familiar to me and I know it's an equation that will work on the plate. Sometimes it doesn't come through. Sometimes the shape of the onion I wanted doesn't work where I can manipulate it. Once we start cooking, we have to see if the actual process will work and still be warm when it goes out. 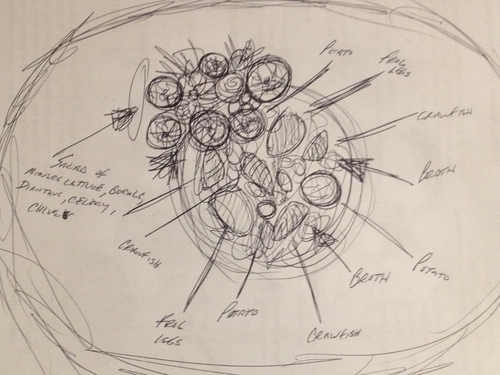 "I was inspired by a nursery rhyme, "this little frog sat on a log ..." and have this little pond scene going on. I thought it was too gimmicky, but then got an email that I could get frog legs from Lake Okeechobee, Fla., and I grew up in Florida. As soon as I found out they were coming from that lake, I wanted to tie something in that I remember as a child and that inspires me and tells a story. I wanted to then revisit this lake or pond scene. It started as a cold dish with flowers and then a day after I knew I could get the frog legs, then I realized crawfish are in season and could get them sent up fresh. I don't normally want to bring them into fine dining because southern cuisine for me is more rustic. They took the place of escargot as the "bugs" in the scene. Then I knew I was going to do the flowers and some broth and then said, 'Let's do a crawfish boil.' And let's make it pretty with all the flowers and herbs. We're just building it up and getting this nice pond scene in the bowl. 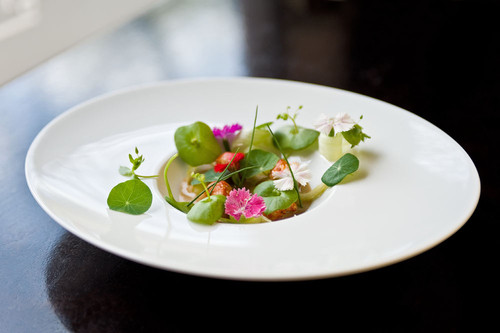 Here's a sketch and finished product for Brochu's butter-poached lobster: 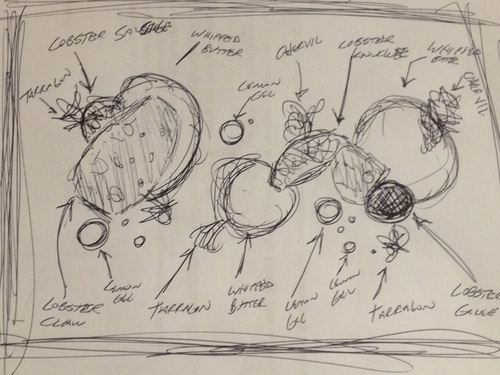 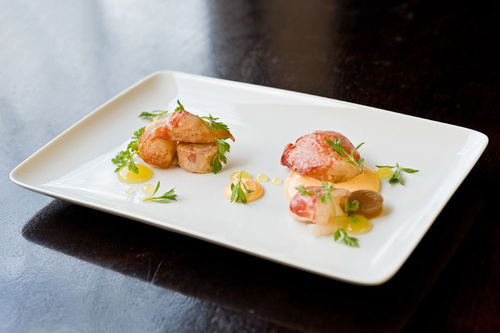 Last, here's a sketch and final dish of the head cheese of redfish with artichoke, mussel gel, leek and fennel: 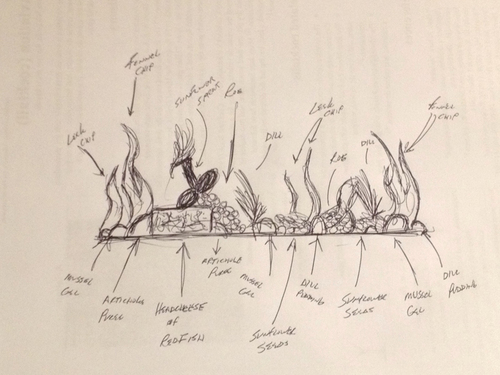 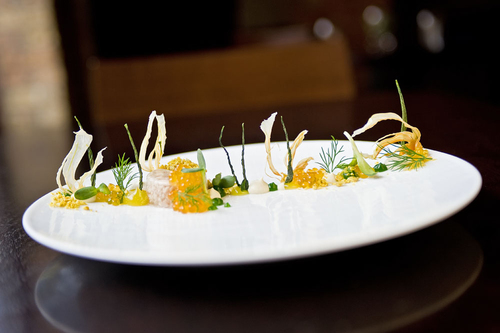 Chicago Restricts the Use of Disposable Plasticware at Restaurants