Things Heat Up in the Kitchen at Next During elBulli

Share All sharing options for: Things Heat Up in the Kitchen at Next During elBulli

Eater writer Joe Campagna immersed himself in the Next kitchen for a full day of prep and service during the elBulli menu to get to know the players behind the food. Below is part 2 of the experience: Dinner service begins. 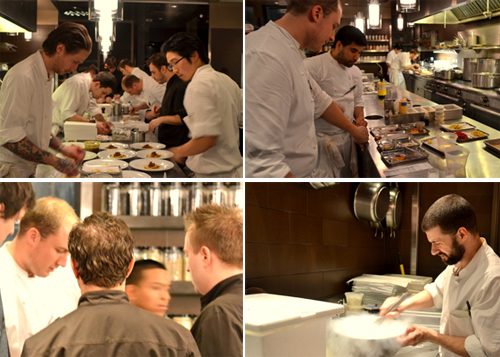 At 5:45 p.m. Next is ready to welcome guests when the cooks shout, "doors!" There are more bodies in the kitchen because of the runners and servers and every cook's nemesis: the expeditor, who in this case is Jeremy Overby. He calls out tickets each night and reminds the cooks if they're behind or ahead. Often the cooks answer Overby with colorful metaphors and if there's a problem it's always his fault. Not a cook, but an important member of the team, the expeditor gets picked on like a younger brother. You love him, but you'll never say it to his face.

With the first ticket in, the kitchen is calling back the orders in unison a bit louder and more sarcastic then necessary. Exec chef Dave Beran brings things back to reality as he barks, "You know the table can you hear you. Focus!" The jokes and smiles flashed just moments earlier become a little more serious. Beran and Rene De Leon, Next's sous chef, taste the elBulli menu in miniature every night. They trade off on certain dishes they're already tired of. With each taste, they let cooks know what corrections need to be made to make the dish better. "I can eat the menu in 30 seconds if need be," De Leon jokes. 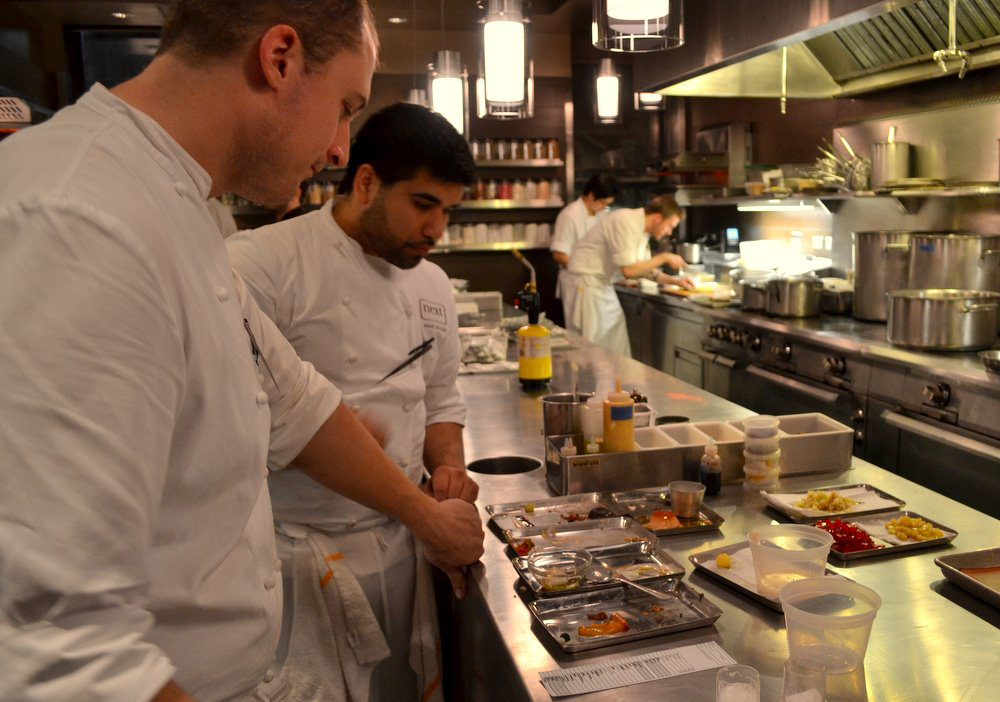 Near the back, Patrick Russ picks up early plates and is already busy. He cooked at Zealous briefly before Next opened after moving to Chicago from Seattle. He likes Chicago and loved the restaurant's "childhood" menu since he learned to make the best cheese sauce ever. He works with Matt Eckfeld, aka Ecky, who is an easy going guy and makes conversation as he plates his dishes. Before Next, Ecky worked at Urban Belly and Blue Water Grill and got this job from a Craigslist advert.

The cauliflower course takes over the kitchen during pre-plating because it has so many components. The pick-up time is long and, if it wasn't set up this way, the kitchen would come to a dead stop backing up every other course. Brent Dawson works in the middle and is noticeable for his tattoos. He sees Next as a chance to up his game. He worked at Kith & Kin and has seen what the Alinea experience can bring to a kitchen when he worked for chef Andrew Brochu (Graham Elliot). He's promised to demonstrate a trick to strain kitchen stock later in the night—he's the stock and sauce maker for the team.

All of the cooks move around to help one another. The kitchen is open, but if you’re station isn't getting hit with a pick-up, you move over to help someone else. A fine dining kitchen experiences waves of courses that can get pretty bumpy at times, slow at others, but the action keeps coming.

Beran warns the heavy push comes between 7 p.m. and 8 p.m. During the midst of this Overby, the expeditor, calls out in a conversational tone, "Starting on golden egg – go on 4 – (to a runner) 6 to the kitchen table – pick up 4 olive block." All the while cooks answer back. Like an air traffic controller, Overby controls the action through verbal shorthand with each cook knowing what he needs to put up.

During the push, the noise level rises with so much activity. Loud enough for the cooks to hear, but still seemingly miles away from the dining room, Beran sternly barks, "Quiet," to bring things back to a normal buzz. He's the marionette pulling the strings. With everything coming at once, he smiles as he walks by, "It's a restaurant." 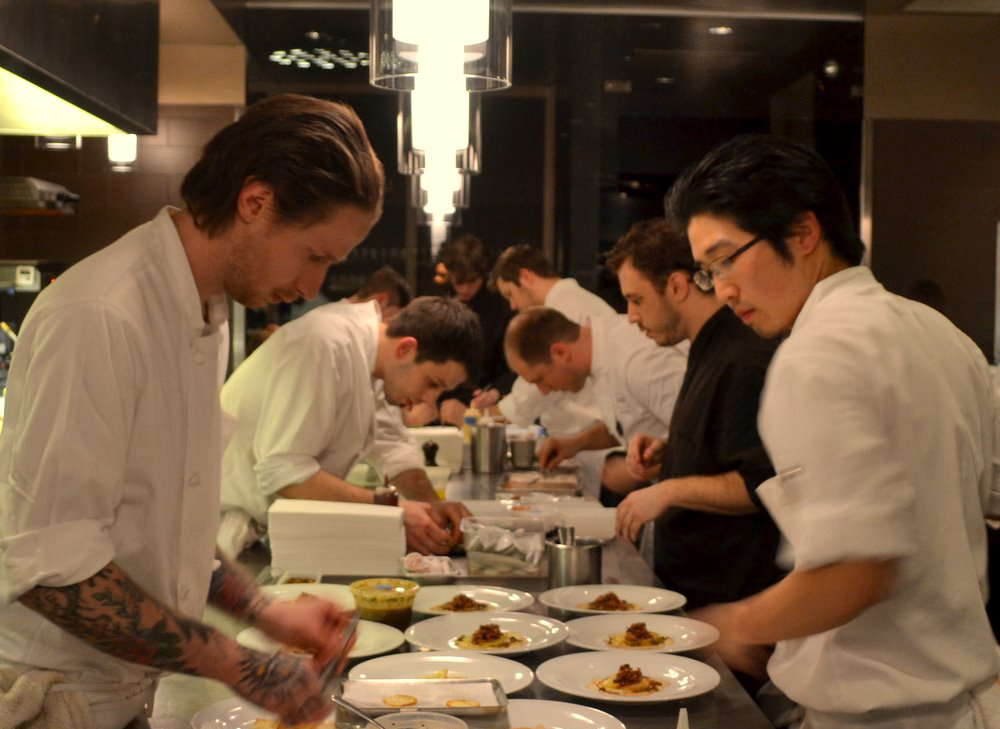 This is a working kitchen with high expectations, so when a plate comes off the line and hits the ground, not breaking, you could hear a pin drop. "What's going on?" Beran snaps. "These are specially blown plates and you're knocking them about? I told the front of house I'd send them home if we had more breakage. Don’t make me send you home." The only reply: "No chef, sorry chef."

Dan Jeffrey, 160 Dan, is another Alinea veteran. He got the job because he kept showing up one day a week to stage—and apparently bringing coffee was his hook. He jokes the coffee was more for him, but he brought enough to share. He has worked at a number of fine dining spots in Chicago and has a quick motor and pace about him. His partner is the pastry guru, Randall Prudden. He's focused on all of the desserts and is very humble about some of his creations. He's easy to talk to and takes time to discuss what he's doing.

After the main push of the evening, it's a long, slow finish with diners coming in until 8:45 p.m. A commotion near the back again draws Beran's ire. "I'll send this whole half of the kitchen home now!" he threatens. "Get focused." All you can hear is water boiling and the dishwashing machine, being thankful you're not in his line of sight. With a happily, oblivious group eating at the kitchen table mere feet away and a full dining room enjoying a wonderful evening, work resumes at a efficient pace. 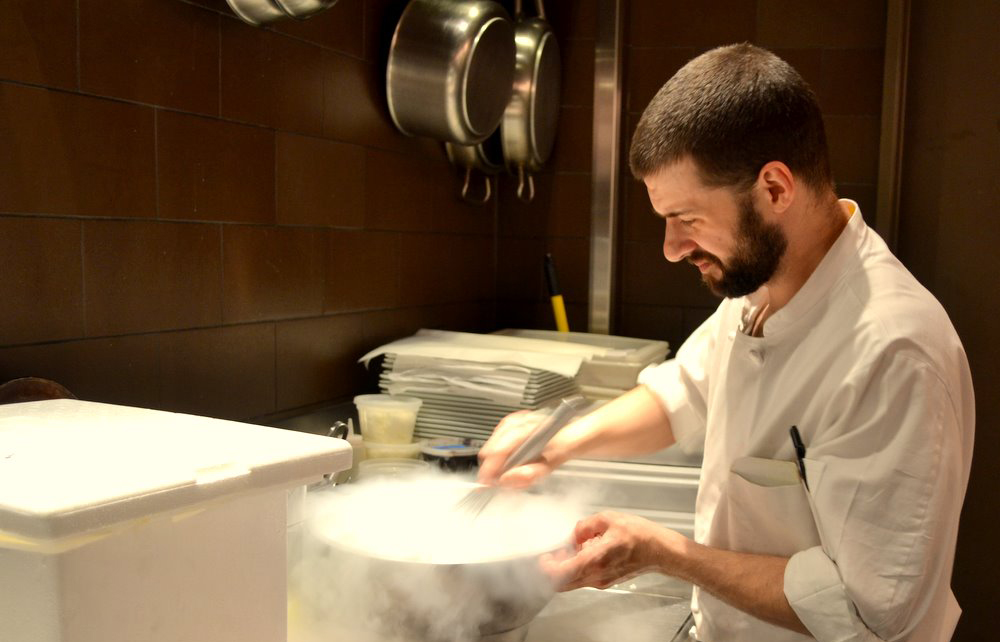 The last plates go out at 12:12 a.m., nearly six and a half hours after the team announced the doors had opened. They've beaten their best time by minutes, striving to get a little faster each night. Overby finishes his night and cleans up the pass as cooks have already begun cleaning. Beran and De Leon discuss the night at the now-cleared kitchen table, their de facto office. They check out Twitter and Facebook, commenting on what other chefs are doing and eyeing dishes someone posted about.

The cooks have finished cleaning and gather for a post-service meeting. Beran notices his newest cook, Jenner Tomaska, looking nervous since the previous night's gorgonzola balloons proved to be a rough spot while this evening the solution caused no ripples. "Jenner, why do you look sick?" Beran asked. "You had a good service." This quickly brings a smile to Tomaska's face and some brotherly ribbing from the other cooks. The team discusses the pitfalls and successes of the night. Going through the next evening's reservations they have only one VIP and call out the donation table, which paid $5,000 for the chance to dine. The cooks are shocked and can only muster a collective, "wow." 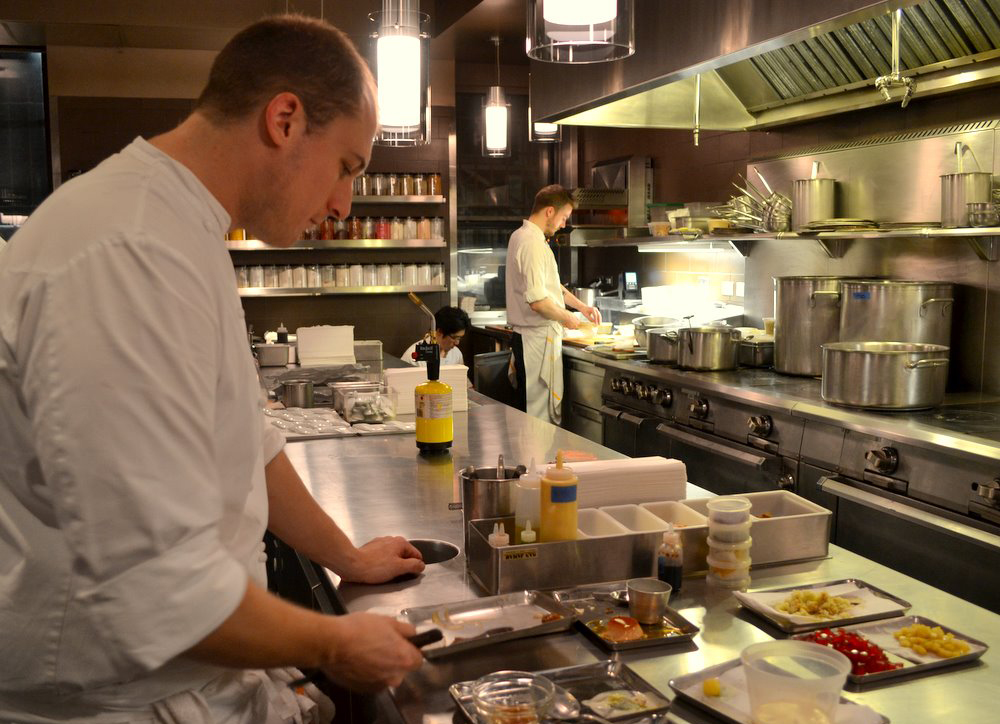 A quick debate settles on the Sunday start time to be 11:30 a.m. This makes some cooks happy and others left hoping for an extra 30 minutes since it is a Sunday and there's no produce to collect. After 13 hours one would think these guys would scatter to get home, considering they'll all be back in 11 hours. But once changed, the team gathers in the alley like a band of brothers for a smoke and chat about where they'll grab a bite or a beer. And then come back and do it all over again.
· Spend a Day in the Next Kitchen During elBulli (Part I) [~EChi~]
· All Next Restaurant Coverage on Eater Chicago [~EChi~]